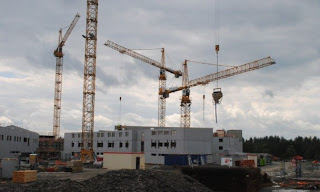 MARCHE-EN-FAMENNE – Five artisanal bombs have been discovered on the construction site of the new prison, by the company Valens-Duchêne. The bombs were equipped with a retarding system and incendiairy bottles.

Around 7 ‘o clock in the morning, a worker discovered a suspicious object went he climbed into his crane.

“One of the workers noticed something abnormal when he climbed into his crane to start working. He discovered the artisanal bomb high up in the crown of his crane, under his cabin. Those who placed them dare, climbed up, probably during the night. One has to be very motivated and very organised,” says a worker of the construction site. “We have not been threatened before this discovery. But if the mechanisms exploded, this could have provoked damage and destroyed the cabins of the cranes. Imagine if they were working. We found four other bombs. Two of the bombs exploded. We restarted to work, but the surveillance measures have been reinforced and every worker has to watch out before using material.”

An act of sabotage

“Installed close to the electronical box, these bombs were placed to destroy material and to sabotage, not to hurt persons,” explained the Prosecutor Elisabeth Dessoy, who went to the construction site in the afternoon. “Visiting the premises, we discovered no other elements. We made a security perimeter, we saw that there was no more danger. Now it is normal procedure. We called in the SEDEE of the army (Service for removal and destruction of explosives) who has to make up a report and evaluate the danger level of the explosives.”

Another bomb discovered this morning 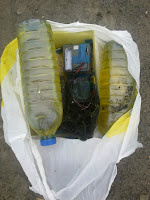