BRUSSELS – On the walls of the hall of the metro station Albert in Forst, masked persons spraypainted slogans against prison guards, naming some the syndical spokespersons of hte guards’ union personally and mentioning also the supermarket Delhaize, which furnishes the nearby prison of Saint-Gilles. Strikes of guards have been going on since a month in the prison of Saint-Gilles. 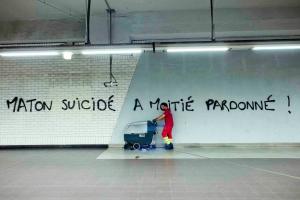