Our friend and comrade, Noureddin Mohamed, died in the centre of Calais in the early hours of Saturday 7 July 2012. Noureddin was 28 years old. Originally from North Darfur, Sudan, he had been in Calais for more than four years. He was well known and loved in Calais, and leaves many grieving friends. He died just some 200 metres from the Sub-prefecture (government office) where he had recently been granted leave to remain in France as a refugee.

That night, Noureddin had been out with a group of friends in the town centre. But a normal night out in Calais, if you are black or look “foreign”, means the constant danger of harassment and aggression from the police. In Calais, companies of CRS riot police patrol the streets night and day with specific orders to stop anyone who looks like a migrant, and arrest anyone who can’t show the right travel documents. Despite a recent French Appeal Court ruling against such racist policing, nothing has changed.

According to Noureddin’s friends, as they left a bar near the main street Rue Royale, they were once again stopped aggressively by the police. Minutes later he was dead. At 3.30 am, his body was dragged out of the canal.

We do not believe that his death was an accident. And we do not believe the official story, which was immediately parroted without further investigation by the local press. According to the police, Noureddin stole a mobile phone from a woman, her friends chased him, and Noureddin jumped into the canal where he drowned. Noureddin was not a thief, and had never done anything like this. Nor do they believe that he simply “jumped”. The police have provided no evidence for their story, except the word of the three people who are supposed to have chased Noureddin.

Racist attacks against migrants are all too common in Calais, sometimes involving local fascist groups, as well as the police themselves. Whatever happened that night, Noureddin’s death deserves a proper investigation. Instead, the case was closed immediately, and the police have refused to perform an autopsy. On Wednesday 11 July, Noureddin’s uncle submitted an official demand to the state prosecutor for an inquiry into “murder by persons unknown”. According to legal counsel, this demand means that the authorities should now perform an autopsy and reopen the investigation. There was no official response.

Noureddin’s story raises grim parallels with the death of a young Eritrean man, Ismael, whose body was found at the bottom of another canal bridge on 22 December. The police immediately closed the case, writing it off as suicide, without any evidence for this conclusion. In fact since 2002 over 100 people have died in Calais due to the inherent violence of the border regime, making Noureddin’s story far from unique. There is no accurate count of how many migrants have died in Calais, their deaths ignored, the facts covered-up or altogether unreported.

Every day in the week following Noureddin’s death, friends, family, and their supporters held demonstrations demanding justice for Noureddin. On Tuesday 10 July around 60 people – not only Sudanese but Afghan, Eritrean, French, and others — demonstrated outside the central police station. They were met by a show of force including around 20 CRS riot police, with flashball guns, who blocked off all the streets around the areas. As people were leaving, one CRS (riot police) officer called after them: “be careful you don’t fall in the water”. It’s certainly clear for “civilian” racists and fascists, too, whose side the authorities are on. So long as deaths go without acknowledgement or reply, it’s open season on migrants in Calais. Racist police officers in Calais know that they can beat, chase, and continually harass migrants without fear of sanction.

Undeterred, the next day members of the Darfuri communities from Paris and Belgium arrived to join another demonstration outside the Town Hall. They carried placards with pictures of Noureddin, demanding “We want to know the reason for the death of our brother.” The mobilisation continues, and solidarity demonstrations have happened in London, Berlin and Düsseldorf, Germany, where 12 No Borders activists occupied the French Consulate while outside, a demonstration of a group of more than 35 people gathered with a local samba band. A banner read “Justice for Noureddin” – in English, French and German. The occupation and demonstration lasted for four hours.

We ask for international actions and solidarity for our fallen friend.

Eight people scaled scaffolding around the French consulate in Belgium to unfurl two banners “Justice for Noureddin” and “Calais is Everywhere, Justice is Nowhere”, whilst a noise demo was held outside the building to condemn the recent death in Calais of Noureddin, a friend of many… 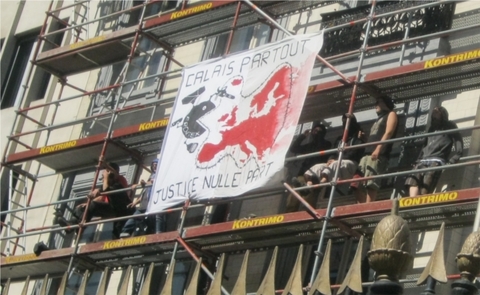 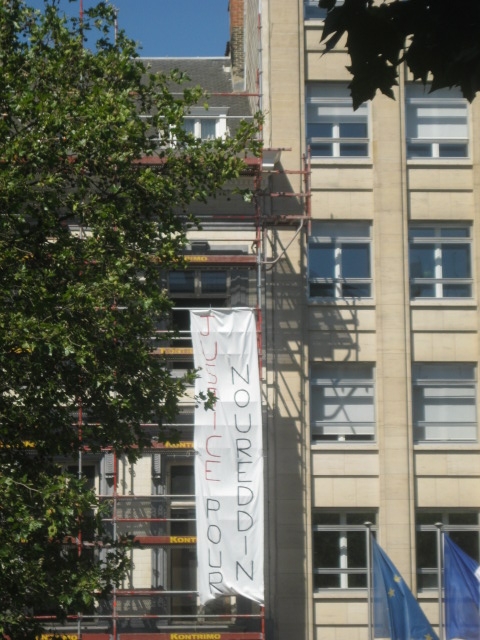 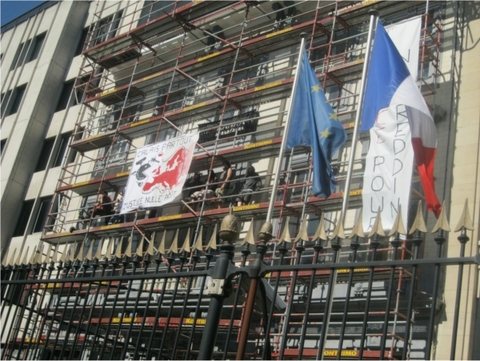 Like the demonstrations in Calais after 7th July, to the 17th July rally outside the embassy of France in London and the occupation of the French consulate in Düsseldorf on 20th July, we occupied the consulate of France, Wednesday 1st August from 11am, to protest against the circumstances of the death of Mohamed Noureddin last July 7th in Calais.

Noureddin was found dead in a river in the centre of Calais after being violently arrested by police. No autopsy was performed and no testimonies were taken of friends who had been with him previously that same night.

The Police, after changing several times the official version, have closed the case as an accidental death.

This death like many others in Calais, is the result of a criminal immigration policy that kills thousands of European persons at home and abroad.

We condemn these deaths and the criminalisation of undocumented people as the new scapegoats of a society in crisis, a racist system.

As in Calais, London and Düsseldorf, we demand that the French authorities promptly clarify the exact circumstances of the death of Noureddin.

More generally, we demand the freedom of movement and settlement for all human beings irrespective of their origin.

Eight people were arrested during the action, all have now been released.

Another friend killed in Calais, death of Noureddin 7th July:

Another friend killed in Calais

One more death. In the early hours of Saturday Morning (7 July), our
friend N., 28 years old, from Sudan, died in Calais town centre. His body
was dragged out of the canal near the Sub-Prefecture. As often in the past,
the police have been point blank refusing to allow friends and family
access to his body, or to hold an inquest into his death. They have already
prepared their story about his death, which is starting to unravel as more
evidence comes to light.

Not because it bears any relation to the truth, but this is the official
line: N stole a mobile phone in the town centre, he was chased by a friend
of the “victim”, and somehow he managed to fall or jump into the canal,
where he drowned. Apparently there is no need for an autopsy or inquiry. No
need to explain police movements that night just before N died. No need to
wait for evidence that he stole anything. This story, straight from the
mouths of the cops, was parroted by the local hate-rag “La Voix du Nord”
without further investigation. A migrant. A black man. A thief. An
accident, maybe even a well-deserved death.

N’s friends, and witnesses, tell a different story. We cannot write more
about what really happened at this moment, but we will do so soon. This
morning (Monday 9) around 40 people demonstrated outside the police station
in Calais. N was well loved. We hope to write more about his life soon as
well, with full respect to all his family and friends. We will not let this
death be forgotten.

The cover-up by state authorities and media accomplices of deaths in Calais
is standard. Just to give another recent example, on December 22, another
friend, Ismael, was found dead at the bottom of a bridge in central Calais.
The police immediately closed the case, calling it suicide. They refused to
allow his friends to see or identify the body, and refused an autopsy.
Ismael’s friends went twice to the police station asking to see his body
and were twice refused and threatened with arrest by the immigration police
(PAF) if they didn’t leave. Only one white French friend was allowed in to
identify him. There was no further investigation.

The border kills. We don’t know how Ismail died. We have seen many times
police chasing migrants off bridges, into canals, into the harbour. Bullets
and clubs are not the only way to kill people. A fall from a bridge can
kill just as well. Constant beatings and hunger can kill just as well.
Years of fear and frustration and humiliation can kill just as well. These
are the deaths that keep Europe’s looted wealth safe from the foreigners.

some of no borders