From the press of the regime 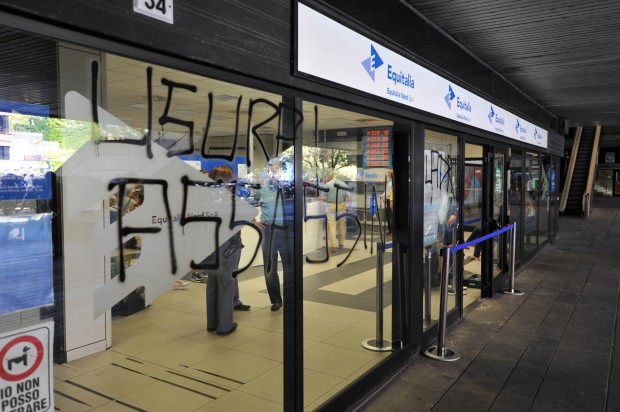 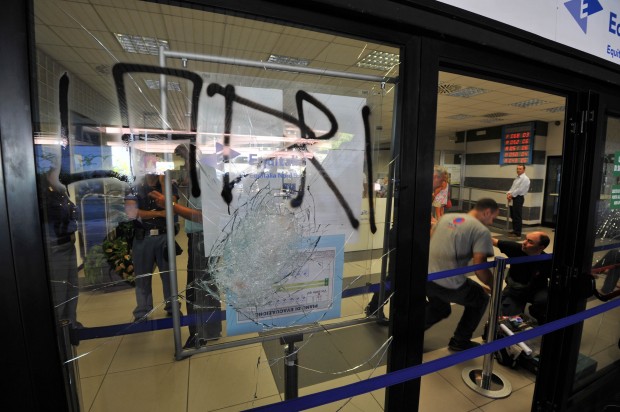 High tension against the tax collection agency is back. Unknown people threw stones and bricks at the windows and daubed walls with insults, such as “murderers thieves”.
Security staff raised the alarm, but the vandals haven’t been located yet.
“Thieves”,”Loan sharks”, “Murderers”, “Hangmen”: these are the messages written by the vandals on the walls of the Equitalia premises on via D’Annunzio.
The windows of the offices were targeted with bricks and stones and some got smashed, the walls were daubed with insults. The vandals tried to get into the building but this was prevented by shatterproof glass.

The alarm was raised by security staff, but the responsible for the raid haven’t been located yet. The offices opened as usual, while carabinieri, along with their colleagues of the forensic unit, started investigation in order to gather evidence. Images from the video surveillance cameras of the agency, the Region palace and a few banks of the area were also gained.      .
Tension is therefore back around Equitalia. In May the employees of the site on via D’Annunzio had lived moments of fear: an anonymous telephone call, received by the police station of Chiavari, had raised the alarm of the presence of a bomb, which later proved untrue.
According to a recent survey made by Community of the daily Repubblica “Equitalia is bad, aggressive. The more people are vulnerable the more they are harassed.” More than one Genoa citizen over two gave a negative judgement on the agency, only one person over four gave a positive judgement. Three over four of those asked think that Equitalia “should be more lenient with tax payers in difficulty”, a percentage that becomes of four people over five in the more productive group, that of people aged 35 to 54. The judgement is so negative that more than 50% of those asked think that the council should charge another body with tax collection.
(08 August 2012)