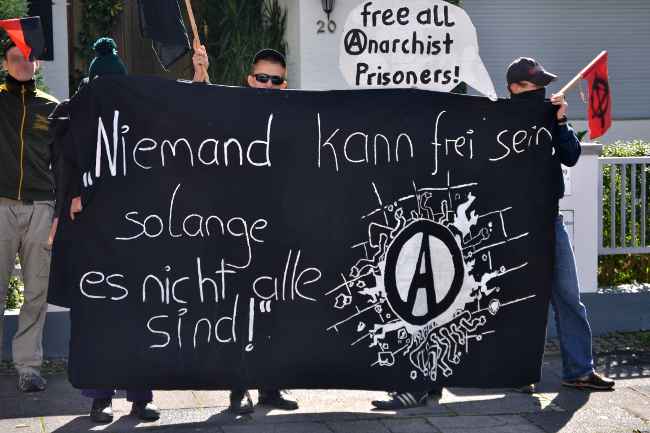 On Saturday, September 22nd, 14 activists demonstrated in front of the Belorussian consulate at the Fritz-Schäffer-Straße 20 in Bonn.

They demanded freedom for the imprisoned anarchist comrades in Belarus. The cause were the parliament elections in Belarus which took part the following weekend and which results were obvious even before the start of the election: Of course President Alexander Lukashenko will keep his president ship.
Lukashenko, who rules the country in a dictators way, likes to persecute, imprison and let vanish opponents of the regime. The accusations the arrested anarchists have to face vary, e.g. they’re accused for having attacked a bureau of the secret service with fire or for having taken part in illegal demonstrations. In all these deeds no one was injured. It is not the matter if our comrades in fact committed the deeds – which especially in a country like Belarus are legitimated and necessary – which they are accused for or not. They are imprisoned because of their anarchist ideals.
In front of the consulate a banner saying „No one can be free until everyone is“ – which is a quote of the German anarchist Erich Mühsam – was shown. Two speeches dealing with the repression in Belarus and especially with the conditions of imprisonment of our arrested comrades were held. In addition the cooperation of the German and the Belorussian police was denounced.

Afterwards the activists repeated their action in the center of Bonn.

Also now actions are necessary! The consulates will be happy about telephone calls or letters which ask for some information about the well-being or dis imprisonment of the arrested.

Freedom for the imprisoned anarchists in Belarus!
For the anarchy!