Translated by Act for freedom now!/boubourAs

First day of the terror-trial at the female section of Koridallos prisons, with the three separate cases and 19 accused. The nine imprisoned comrades members of the CCF and T.Mavropoulos, who appeared today left the court room immediately after Olga Economidou read out a statement by the organization.

“Before your court-martial begins, I would like to make a statement by the members of the CCF. We are hostages of the greek state and we clarify that we do not recognize any authority, let alone the juridical and of course none of your laws. The fact that we are hostages of war does not mean we have surrendered, that we have regretted.

We remain proud for our organization. Each action of the conspiracy, every word we wrote in our communiques is and will remain an unrepentant part of each one of us. The CCF is the path of the new urban guerilla, it is a part of a widened global conspiracy against the constitutions and the ethics of society which enslaves the human for centuries now.

The CCF is us 9 who have taken the responsibility and none of the other accused have anything to do with the organization and couldn’t. We continue to walk forward together with our comrade Theofilos Mavropoulos in the unstoppable course towards the continuous anarchist insurrection without looking back… we abandon the inhibitions and excuses and we throw ourselves in the fire of action for now and forever.

From here where we stand we send our most warm greetings to the wanted, for participation in the CCF, Dimitris Politis and Giannis Mihailidis. May the fire of the new anarchy forever cover your traces. Until the meeting time at the point of no return. Also we send strength and solidarity to the Italian insurrectionist comrades who are persecuted by the italian authorities as well as to the non-arrested comrades of the Informal Anarchist Federation.

Finally with our thoughts and hearts we are next to anarchist comrade Mario Lopez who was arrested in Mexico injured from the explosion of a home made incendiary mechanism which he was transporting and to anarchist Felicity Ryder who chose the paths of clandestinity and is persecuted for the same case. 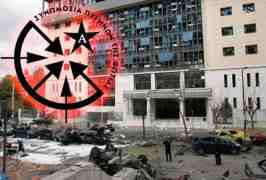 Some legal information about the case.

Chairwoman of the terror-court (its official title is Three member felony appeals court) is the president of the appeal judges Maria Tzanakaki and members are Aristidis Baggelatos and Katerina Hondrorizou.

For the first of the two the case will not be examined because he is of no fixed abode, and the second will be tried in absence because he has a known address.

We have therefore, a total of !9 accused comrades, from which 13 are imprisoned, 4 are free and two are living in clandestinity.

Also, there is a lawsuit by the two cops injured in Pefki (Leontopoulos and Drotsos), only against T.Mavropoulos (for attempted homicide).

There are represented by infamous P.Mantouvalos, together with Kostandinos Pavlou for one cop and Eleni Makinopoulou for the other.

In the morning, the chairwoman although looking clam she had lost complete control of the situation. The room was filled with prosecution witnesses and remained outside not only the dozens of people gathered I solidarity, but even the relatives of the accused comrades. The comrades present stated they will leave in protest, and there was two interruptions until entry was allowed to the amount of people that fit in the room.

During the breaks the 13 comrades (S.Antoniou and K.Papadopoulos are free on condintion, while D.Politis and G.Mihalidis are not there) are transferred to the wing with the new white cells, which was built in the old court room, while at the end of the sessions the men are transferred with a van across to the male section of Koridallos prisons.

When the comrades returned to the court room, the 9 members of the CCF and Th.Mavropoulos remained standing and O. Economidou insisted they read their statement.

The chairwoman tried to stop her, in the name of the rules, but Olga insisted and read it out. After that, the 9 members of the CCF and T.Mavropoulos left the court room. The comrades which remained in the court room were prisoners A.Mitrousias, G.Karagiannidis, K.Sakkas and also S.Antoniou and K.Papadopoulos (C.Politis and D.Michail who are accused of misdemeanors did not appear and will be represented by their advocates).

Then the chairwoman announced the names of the accused and their advocates who are: for G. and M. Nikolopoulos and P.Argirou is Fragiskos Ragousis.

For T.Mavropoulos is Ioannis Fotopoulos.

For S.Antoniou is Ch. Ladis.

Five members of the CCF (C. and G. Tsakalos, Damiano Bolano, Giorgos Polidoros, Olga Economidou) had left the court room and did not approve any advocate to represent them. The court appointed two lawyers each and two lawyers to replace any advocate who couldn’t show up. Of the 130 prosecution witnesses, many were absent (mainly foreign nationals from the parcel bomb case). The prosecutor proposed that their mandatory presence is required and each of them will be fined 100 euro, but the court reserved the decision for a future session, because some might appear still.

The next session is scheduled for Wednesday October 10th at 9am.