“All decisions, when about freedom, close death inside them. We, through this death must win life. A deep breath for the journey with no end”

In Pefki there was an armed clash between two anarchists and the forces of the police.

Its two dogs, Leontopoulos and Drosos tried to arrest me and my comrade. Our answer was the refusal of surrender through armed resistance aiming at retaining our freedom, which we highly appreciate as anarchists.

The result is known, my comrade escaped by stealing the cop car and I was arrested while injured. Together with me were injured both cops which I shot first managing to surprise them. No doubt, if the cops died and me and my comrade were unharmed, we would have left.

Irrelevantly from the fact that my operational priority was disengagement and escape, it would be my honour if at the same time I had the blood of the two cops on my hands, not only because they tried to arrest me, but simply because they are cops.

Every cop as an immediate carrier of authority, for whatever reason they became a cop, is a live target for an anarchist armed revolutionary. Politicians, mega-journalists and mega-businessmen, snitches, fascists, representatives of the cloth, correctional officers and of course you the judges, as well as every other pillar or lackey of the system, are always in the target of the urban guerillas.

The generalized attack against the existing, of course, becomes more complete when all means are used. Stones and molotov, fly-posting and flyers, slogans, texts, demonstrations and p.a. Sound system gatherings, bombs and bullets.

In the frames of the multiform anarchist action and specifically those of armed struggle, I also had the honour to meet the nihilist urban guerillas of the Anarchist Revolutionary Organization C.C.F. In the houses in Volos and Kallithea, I was not present loosely as a comrade. I was a factual part of the intriguing against the rotten world of authority. I had consciously made my passage through to revolutionary clandestinity together with other comrades unknown to you, as well as with the wanted brothers Giannis Mihailidis and Dimitris Politis. Target of each one was to spread anarchy to today at the expense of authoritative society. This target remains a continuous bet even for all those of us who are in prison, since we are unrepentant for our choices and the battles we gave and give as anarchists of praxis.

Because we got sick of the routine, the inhibitions and the cheap way of life they are trying to serve us. Because we got disgusted with the perceptions of subordination, ass kissing, snitching and the hunt for social and economic advancing. Because we hated every authoritative worm that wants to steal our lives and finally because we wanted to take our lives into our own hands in the here and now and we declared the anarchist war. Through this war we discover ourselves every day, together with the anarchist thoughts we create and open new prospects of attack. We fight against the existing because that’s the only way we exist.

The clash at Pefki began as an random identity check and concluded with an, not at all random, battle of free people with the forces of order, anarchy with authority, and more proof that the “almighty enemy” has flesh and bones and is mortal. It was a battle, a conscious choice for which I am proud and sure that if I could go back in time I would do it again. Besides, the most powerful weapon for a insubordinate anarchist of action is non other than their conscience. 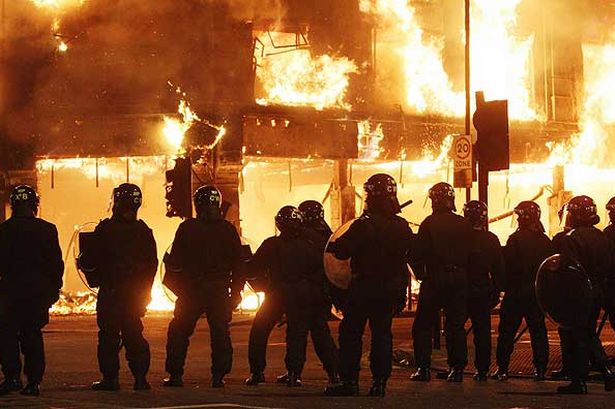 For the battles given and that will be given.

Until the complete destruction of the existing and the structure of anarchy,