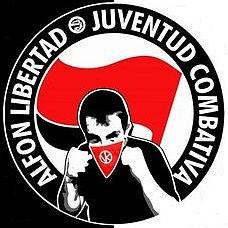 The number of political prisoners in Europe is on the increase. Following the first European strike that took place on November 14, a comrade is still being held in prison. He was not captured by chance: Alfonso Fernandez, known as ‘Alfon’, is a well known activist as is his mother. They both are antifascist and anti-capitalist comrades, very much involved in the struggles of their neighbourhood, Vallecasas in Madrid.

Alfon, who is 21-year-old, was arrested on the morning of November 14 near to where he lives. He was going to a meeting point along with his girlfriend, when the police stopped him and accused him of carrying a tank full of petrol. The couple were repeatedly questioned, tortured and threatened by masked policemen. Their families were also threatened by the police.

While Alfon’s girlfriend was later released, he is still being held in the FIES unit of the prison of Soto del Real in Madrid.

According to recent updates, not only is Alfon subjected to restrictions on visits and censorship on letters, which are typical of the FIES punitive system, but he’s also being threatened of being moved to a prison on the Canary Islands, away from his comrades and family. Collectives set in solidarity with Alfon warn not to write to him directly so as to avoid an interruption of urgent communication. Alfon, in fact, can receive only two letters per week.

For more info in Castilian: