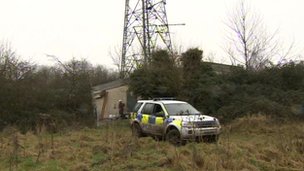 As part of the ongoing anarchist war for total liberation, we carried out a hit on the Bathampton radio and TV relay station. Fires were set at four points of the structures, and we left undisturbed. As a result of the sabotage, on top of causing hundreds of thousands of pounds worth of damage, we regionally shut down all TV channels on Freeview as well as all national analogue and digital radio stations. Additionally it took down Vodaphone and other mobile networks, damaging police communications and other digital services. 80,000 homes and businesses in the area were affected.

The entertainment industry is an important tool to manipulate human behaviour.
Without a steady supply of distractions it would be much harder to persuade people that their lives are satisfactory, to convince them to keep going to work or in whatever way to reproduce the system. So to deprive the network of the ability to offer this essential means of escape from chronic modern stress, anxiety, frustration and dissatisfaction is to undermine the smooth running of society, however temporarily.

There are many soft targets and many lo-tech methods available for us malcontents who gladly choose conflict over despair. This gives rise to the prospect of rebellion with thousands of faces, with infinite reasons to blockade and destroy whatever stands between us and our goals. We want to experience harmony as a living planet, face to face encounter as intimate circles of proud and free-thinking individuals, and a chance to mould an existence filled with wild play and fierce joy. Our first response when faced with today’s crushing domination and a subservient society will always be outbreaks of disorder, refusal and beauty.

Our comrades from far and wide who also carry this fight share our thoughts so closely that often their words could be ours. So when they are kidnapped and held far away from us our determination is only further fuelled. Following many actions in Italy the state has unleashed a wave of repression against anarchists and their projects (Operations Ardire, Mangiafuoco, Ixodidae, Thor…), some across borders, accusing some of attacks of the FAI (Informal Anarchist Federation) and raising a trophy for the media-judicial circus: Nicola Gai and Alfredo Cospito, who they claim are FAI / Olga Cell. But if the prosecutors thought for one minute that they had dismantled the group even in Italy with their operations, another cell soon proved them wrong with an attack on the banking system in the capital, followed by grid sabotage in Indonesia, gunshots in Mexico, liberations in Russia, bombing in Greece, mass arson in Argentina, to name but a few. The new anarchist guerrillas laugh in the faces of the powerful because the repression is only throwing petrol on the fires of the open leaderless resistance.

We are on the side of everyone who has burnt stuffy textbooks and taken the offensive to reanimate an anarchy that had turned to dust in so many throats. Any rebel’s capture becomes yet another motive to strike, as we have before and will again, as a reminder of the social cost of their imprisonment.

This action carried out eight years to the day since Xosé Tarrio (a dignified prisoner of Spain’s FIES isolation units, against which a series of attacks last decade were later claimed by the first generation of the FAI) died in the cells, leaving his blood on the hands of the jailers, courts and cops.