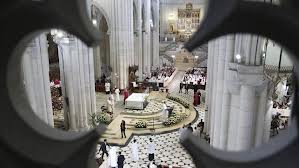 Press claiming of explosive device placement at the Almudena Cathedral in Madrid. The social culture broth kindle our hearts and active our minds. Action-Reaction: unemployment, home evictions, fascist attacks, mass suicides, spoliation and humiliation resulting creation Group of Fire, a force that can not be stopped because it is in our mind. Create a group of fire, fire cell, is extremely easy. That members evoid jail is extreamly difficult. The house of God stick in ass in Madrid (Thursday February 7, 13 hours) We demonstrate that your sanctified haunts are vulnerable. The foundation of your power have trembled for our sacrilegious kilos of powder, seeking to break your peace civic based in dead people and people locked up for years in the slammer. This is the vanganza. We overcame the barrier of fear. The target of this explosive explosives is clear , to rock the Bourbon monarchy in their holy places. All his majesty is the result of oppression, and will be we the oppressed who end up with it by insurrectionary revolutionary violence. Do not fall into the trap of waiting to be given historical conditions. We believe that conditions are ripe for attack whenever there is state, capital and moreover a rotten fascist royal family . We are determined. No await. We act. We do not have the mistaken idea that only through such actions will achieve the destruction of all that oppresses us. We are not deceive. We self-please. This is publicity by facts existing over a century ago between the rebels and conspirators against power. It is a call to war without limits using all our imagination and energy to end this rotten world. Fire at sack Anarchy Alive! Command Insurrectionalist Mateo Morral http://contrainformate.blogspot.co.uk/2013/02/madrid-reivindicacion-de-la-colocacion.html Given the abuse of state and capital no aggression unanswered! Oligarchist wanted to militarize the country and needed an enemy strong enough. We knew that after the fall of ETA, Communists collaborating with the power, lost the golden moment with the Arab yihaidismo after March 11 terrorist atack, the next target would be the anarchists. Now there is an answer that the power will profit, through their control of mass media, to divert the gaze of their corruption and looting. Knowing the means at the disposal of the state, group members know that if they don’t run away will be taken. Working from prison is an option, but from our point of view is the worst option. It takes people working out, organizing resistance and ready to strike back. Ideally, a unique and unambiguous, but we know that reality rarely conforms to our expectations. We in tarcoteca are not insurrecionalistas because we are not personally believe that the “fast track”, this propaganda of the deed, publicity by facts, although legitimate, brings more disadvantages than advantages. We are aware that the road union, cooperative or squatting is not giving the expected results, but we still persevere in our efforts. We respect the action of colleagues, understand their views and will bring all the solidarity we can. Comrades, you are necessary more than ever. Health and Anarchy. http://tarcoteca.blogspot.co.uk/2013/02/fire-cells-in-madrid-claiming-placement.html