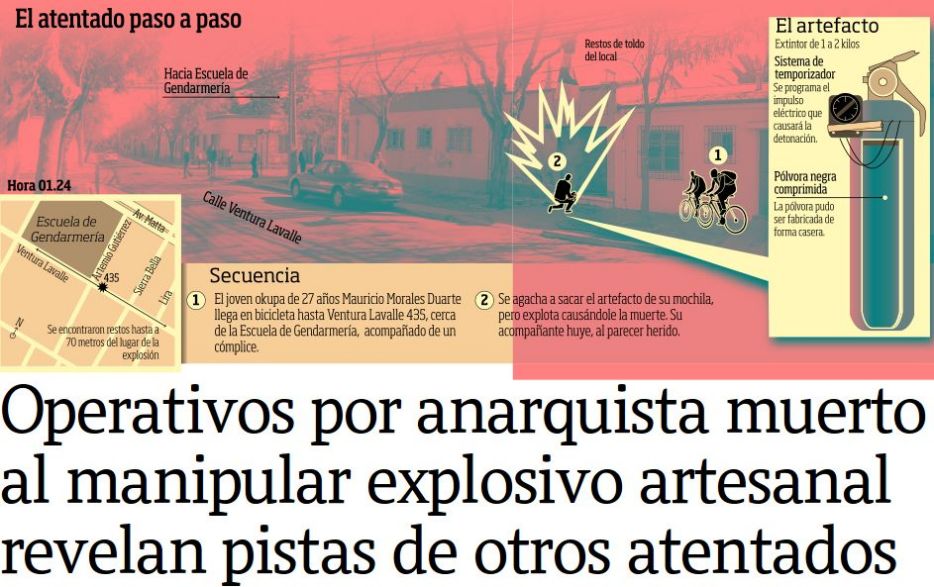 Note from LT: This advice that came to us by mail goes out to those who choose the path of nighttime action. It is very important that the compañerxs who risk their lives to deliver, with their homemade armaments, blows to the icons and ideology of the dominant system take every measure of precaution to not injury or damage people who have nothing to do with the target of the attack. And by precaution we mean not using means or tools for the attack that we don’t know or understand well, such as the chemical reactions that a device produces at an internal level. But this doesn’t mean that other means can’t be used, that are easier to handle like (correctly armed) molotovs, rocks, etc. The same goes for incendiary devices with mechanical and/or chemical activation (slow or homemade fuses), title=”More…”>href=”http://waronsociety.noblogs.org/?p=5814″>as we noted in a previous article [En], since these tools of the guerrilla arsenal are made by processes that are simpler and easier to understand. The life of a warrior is worth more than the lives of thousands of soldiers or police!

To conclude this note, we share some advice written by a veteran saboteur who is practically certain that the activation of explosives by mechanical means is safer than electric activation: letter-advice for the saboteurs of a high-tension pylon in Farellones, Letter because of the death of the compa Mauri and Letter about train derailments and stupidities [Sp].

Note from WOS: Apart from agreeing with the note from LT, we clarify our reasons for spreading this information in English. The kind of device described below as “common” is not common in our geographical context, and we are not suggesting that it should be. Here there have not been many recent cases where accidents have left individuals wounded or killed by their devices. However, there are many individuals currently in prison (Eric McDavid, the Cleveland 4, and Mark “Migs” Neiween) whose legal cases have to do with trying to get prefabricated explosives. Of course a major factor in these cases is police infiltration, and the main lesson is to only work with people you know very well. But also, it is not worth the risk of prison time or personal injury from complex devices that one doesn’t fully understand and can’t create from easily-available materials. Spreading information on how to make simple, safe devices from readily-available materials can contribute to safer practices. To this end we translate this advice and soon we will also translate some of the others that LT mentions above, which deal with devices that are simpler and easier to understand than the electric-activation described below.

This information is not intended to give anyone a false sense of security. Because of the severity of the consequences that an error in this kind of information could have, and the possible mistakes in translation, we make two requests. The first is if you see something confusing, please take the time to contact us anonymously by comment or email and we will update this post. The second is this information should be taken with a grain of salt, and–as the text itself says–everything well tested and understood, not trusted.

For more information on this topic, you can see “Setting Fires With Electrical Timers” (pdf)

If we review the accidents, some of them fatal, of the past few years, we get the impression, pending more information, that the error is almost always the same (in the one that cost Zoe’s life [Sp] it seems more like a possibility): the accidental closing of an electronic circuit. Below we detail a few and simple pieces of advice to avoid this. We are taking as a premise the common device made from a battery to a detonator, with a timer, a bomb properly speaking, and all of this placed into some kind of bag or backpack. [1]

– Everything that is susceptible to causing an involuntary conduction of electricity should be well isolated/separated. All the elements of the device have to be well secured and presented in such a way that makes the next step easier. The next step is:

– After testing, at the final destination, that the circuit does not accidentally close, put the battery in. An alternative is to bring the battery already connected, but in this case one should place at least two security interrupters that will be also activated once having verified that they don’t produce any fatal contact and with the device at the target you are hitting. If it is considered a risk to devote even the few seconds that are needed for this maneuver, you can do the activation in the closest possible sheltered place, and then go to the target, but let it be known this is not ideal. The thing that in any case makes it easy for us to end up dead or mutilated is making a whole trip with the circuit at the mercy of only one casual, unpredictable connection.

It is becoming ever more difficult to find mechanical clocks, at least around here. We are left with the old, dear (and generally effective) cord-wound alarm clock [2] and similar devices. So it seems ever more common to turn to battery-powered alarm clocks with external or internal manipulation, digital alarm clocks, or programmable wall clocks with reserve charge. The infallibility of these last two is to be assumed, and they also have the benefit of being able to delay for much longer (even weeks) from the placement until its final illumination. But now with these and with the battery-powered alarm clocks with internal manipulation, there is an inconvenience: we cannot know by plain sight whether or not the accidental connection we fear has been made inside the clock’s own body, or whether there is an error in the programming. One can make up for this with a small parallel circuit ending in two or three light bulbs (according to what kind they are) or in a reliable battery tester. Why more than one light bulb? Well, because full precaution is not enough. It is not so unlikely that the light bulb’s filament could break during the trip, but two or three is more difficult. One should have the same thing in mind with the fabrication of detonators based on light bulb filaments.

Always doing the same thing is boring, inefficient and dangerous, very dangerous, if they catch you red-handed.

Storing already-fabricated explosives is also not ideal, not for your health and not for a possible legal defense if they nab you. If for some reason you break this rule, the least worst (to use a saying) is storing only the most valuable component in the case of the explosive being of your own making; generally the oxidant, generally a nitrate or chlorate.

If we are fabricating it ourselves, in addition to respecting the common sense security norms, we do it in small quantities, little by little, never in large mixtures all at once that could be fatal for us in case of an accident.

Always checking the electronic and chemical components and testing the circuits.

May everything explode that has to explode

[1] This kind of construction (shown in the diagram from the press) is very common in Chile and fairly common in other places. To summarize the diagram: The device is made with a fire extinguisher filled with gunpowder/black powder which may be made at home. The detonation of the powder is done in different ways, including a spark or a light bulb filament. The timer mechanism controls at what time the electrical charge is sent to the detonator.

[2] By cord-wound alarm clocks they are speaking of the purely mechanical kind without batteries.

The images were in the original. They are from a press story after the death of Mauricio Morales.