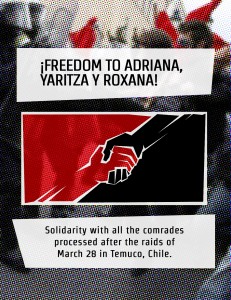 The police carried out in the morning of Thursday March 28, two violent raids in different parts of Temuco (Chile), in the context of repressive tasks before the commemoration of the Youth Combatant’s Day.

According to media reports, 12 people were arrested in both operations, four of them were women. They were taken to the “disgusting” police station of  Temuco.

One of the operatives took place in a house at San Ernesto st. with O’Higgins st; in the area of Dreve square, which would correspond to Pandemia Space, where a few days ago were released a statement against the police harassment, at the same time a raid took place in Capri Street, Amanecer area.

According to the raving policemen were found: drugs, explosives manufacturing elements, watches and 2 unfinished bombs installed in fire extinguishers, something strange when you consider that just a few days ago the statement was released from Pandemia space

The items supposedly found, are analyzed to try to link the comrades with the devices installed recently at the Regional Temuco’s Gendarmerie Directorate and in a fire in the wood yard of Sodimac store.

Today March 29, the Temuco’s Court of Guarantee, resolved that: the  comrades  formalized for the crime of possession, manufacture and installation of explosive devices, are: Adriana Torres Torres, Roxana Marín Laurie y Yaritza Grandón Paredes,  who will spend five months in custody. Also two comrades were charged with 100 grams of marijuana and they are being processed, so they will be in custody for at least three months.Six comrades were released but they should pay an amount of 2 UTM (U$D 160) for refusing to give their identities.

The call is to solidarize not only with the comrades kidnapped by the capitalist system, but also with the Pandemia space.

Freedom to Yaritza , Roxana and Adriana! To show our  solidarity!