June 21: All the street for freedom of Barcelona 5 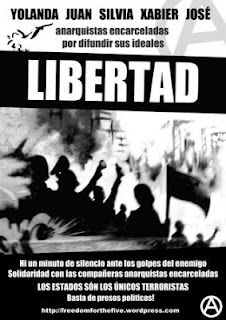 On May 15 were arrested in their homes five anarchists in the province of Barcelona.

His crime? Having participated in demonstrations involving in altercations and spread their ideology through Facebook groups. Therefore, they are accused of belonging to a terrorist group, praising terrorism and recruitment and indoctrination. As proof of his guilt in these crimes, police seized material contributes in their homes: anarchists flags, libertarian philosophy books, black clothes and rockets and firecrackers that we all keep to San Juan [popular party].

Despite the nonsense involving these allegations and “evidence” to cling to, their ideology against the regime wasestablished enough for the judge Mr Pedraz to condemn them, currently in prison Soto del Real, Navalcarnero, Aranjuez, Alcalá-Meco, in Madrid under the FIES 3 regime [penitentiary dangerousness classification system for prisoner from 0 to 5].

Their case can not be understood isolately, but as a piece in the Spanish state repression strategy that is making strides toward authoritarianism which is heir. The arrest of these five anarchists is a precedent that will be used to justify further indiscriminate persecution, something no citizen of this country should allow.

In this context we call for solidarity of all those who appreciate the injustice they have suffered these five companions, June 21 meet in the streets of our cities with banners and candles, to feel our warmth even when isolated in their cells.

We ask for spread this quote and the situation in which the 5 of Barcelona find by all means, everyone will know about the political persecution that is taking place in this country.

FREEDOM IS THE CHASING CRIME!!! ENOUGH OF REPRESSION!!! FREEDOM FOR THE BARCELONA FIVE!!!!