There have been demonstrations across Greece and all over Europe since the murder of Pavlos Fyssas by Golden Dawn Nazis in the early hours of Wednesday morning.

Over 350 people attended the solidarity demonstration at the Greek Embassy in London today – largely composed of Greeks from various political tendencies  A contingent from London , anarchists in london Anti-Fascists and South London Anti-Fascists also joined the demo with a “Solidarity with Greek Antifa” banner. The cops initially refused to let people stand on the side of the embassy which was quickly ignored.  Two people were arrested as cops were getting aggressive and unfortunately couldn’t be de-arrested due to the number of police (they were supported at the police station and hopefully will be released by tonight). As the crowds grew the road was taken by hundreds of people as a sound system playing the songs of the murdered anti-fascist was blasted out.

“No one and nothing is forgotten! Organize antifascist self-defence!”- Germany

Let’s raise our voices against fascism!

Yesterday, a gang of neonazis from Golden Dawn murdered in cold blood the 34 year anti fascist and known hip hopper Pavlos Fyssas. The murderer confessed that he is a member of Golden Dawn.
Express your solidarity to the victims of Golden Dawn and spread the news about the murder of antifascist Pavlos last night in Athens, Greece.
This is a fight we all need to give. First they come for the “other”, then for your neighbour and in the end they come for you!
Stand up for the others, stand up for yourself. Don’t stay inactive. Act now before it’s too late! Get involved. Spread the news and raise awareness.
Lets organize together a protest tomorrow (meaning Thursday 19/09) at 18:30 in Dam Square, Amsterdam.
Don’t keep your anger for yourselves!

fotos and video from greee 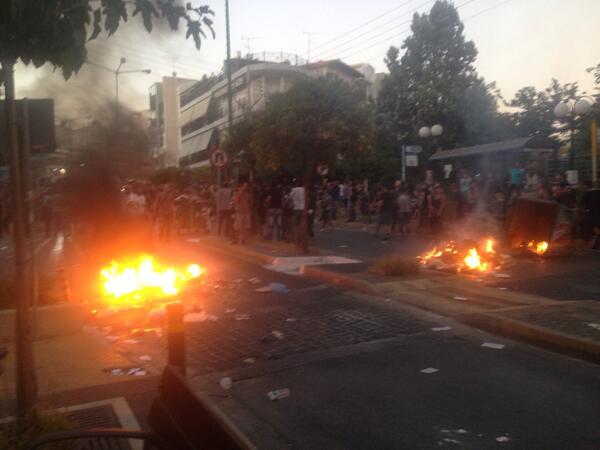 Molotov cocktails, streets barricades, tear gas…. angry protesters attacked the police station of Keratsini on Wednesday 18 /9/13 afternoon hours after the murder of rapper and anti-fascist Pavlos Fyssas by a  member of the nazis Golden Dawn. Photos and videos

More than 10,000 people gathered on Wednesday afternoon in Keratsini suburb of Piraeus to protest the murder of Pavlos Fyssas.