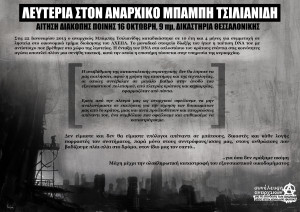 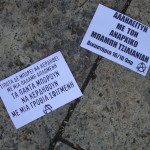 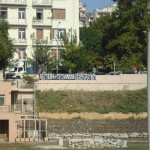 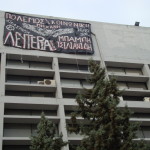 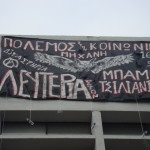 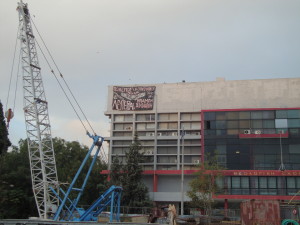 We have received and postup!

“Those who live are those who fight, those whose soul and mind are obsessed with a constant planning. For them the abrupt ascension symbolises a huge destiny. Those who walk thoughtfully, absorbed by a great purpose.”

On Wednseday, 16 October in Thessaloniki’ s courts will be examined the request for an interruption of serving sentence of Babi’s Tsilianidis, concerning a robbery in Ahepa hospital.

The comrade, being imprisoned since January 2011 (for accuses that don’t burden him anymore) he “takes” a third-extra pretrial incarceration, and this time the only “evidence” was a handkerchief, in which, as cops says, DNA that “matches” with Babi’s genetic profile was found .

During his whole incarceration, he refuses any cooperation with the authorities, he doesn’t give his fingerprints and his DNA, he doesn’t apologise to the interrogators, he refuses to be present to the courtrooms. During the trial, on 22 January, 2013, the prosecutor proposed 10 years and 4 months imprisonment. Do not get used to fear We understand that DNA, nowadays , except of another chapter in the biology books, can also become a sufficient element to set up a conviction, which was based on a supposed scientific authority. Beyond the configuration that state, technology and science shakes once again their hands, DNA is an extra addition, among thermal cameras and surveillance cameras, alarms, databases, fingerprint-banks, cops’s and security’s patrols. It is another tool in the authoritarian’s arsenal, it is a part of the total strategic enhancement of the repression and it comes to complement the image of a regime of surveillance and control. The entrance of new repressive methods in the technological modernization of the state could only be implemented experimentally firstly.

So, we see new practices to be tested on more radical parts and then to be expanded on enlarged fighting communities. Recent examples (after the comrade’s conviction) are those of the imposed taking genetic material from the fighting residents in Halkidiki and their imprisonment (some of them), but also the EKAM’s (special police force)draft and not only for the transport of comrades accused for armed action, but also for the repression in demos, squats and strikes. In that way, on the one hand the domination tries to understand what is hapenning, and on the other hand to exemplary punish its enemies.

And if it aims once to establish the fear inside us, it aims a hundred times to make us get used to the adaptation in a city-prison. We do not speak, we do not give fingerprints and DNA to cops In a condition like this, where the control and the imposition of the modern repressive methods are implimented widely on our daily lives, the creation and the spread of struggle communities become more and more imperative. As well solidarity relations will promote our common choice for revolution and freedom. So by the connection of multiform ways of actions and thoughts, by building structures that will act compositively to each other, we will be able not only to stand collectively against the repressive moves, but mainly to create our own moments of attack. The fact that in the struggle a variety of means, actions, ways of speaking, and also of different viewpoints emerge, can’t be a drawback or act oppositively to the common attitude that we must have against the enemy.

And this happens, because the non-cooperation with the enemy is a part of a broader view of our own position in the warfare. So it becomes clear as well as necessary to put forth the refusal of giving DNA, the refusal of giving fingerprints, the refusal of the invasion of repression in our thoughts and our bodies. Clear and necessary to apply these denials, in practice and under any circumstances in order to conserve not only our personal freedom, but also to leave a collective collateral to the people who will stand in the same place with us, in the near and distant future. No law can define our actions The choice of refusing to give genetic material on a personal level is a conscious fight position in the war we take part in.

Of equal importance is that these refusals should be expressed through common struggles. Should become real through collective processes. The choice of denying the state’s experimentation on us, comes to confirm the refusal of reproducing judicial-legalist dipoles around innocence and guilt. It comes to demolish the dichotomy that the enemy structures to divide and absorb our action. It makes sense to be able to decode this dipole that the dominance has structured, but also to stop reproducing it through our struggle communities.

The non-collaboration with cops and judges gives prominence to the apparent power of the bourgeois legality. All these are seen through an immovable value, which says that we don’t give information to cops, which doesn’t accept the state’s omnipotence, which doesn’t wait anyone judge to condemn our action and our existence as guilty or innocent. “Besides, for our enemies we will always be guilty for our attempt to fulfil our desire to live free, to define our lives on our own at an individual as well as a collective level, in harmony with nature, away from webs of authority, control and mediation, from relations which reproduce hierarchies, oppression and exploitation, from the dependence on “experts”.(M.Tsilianidis)” The court’s decision was 10 years and 4 months of imprisonment. This decision was the first conviction of an anarchist captured on the basis of DNA.

This decision does not focus only on Babis himself, but also comes to open one more road for helping cops and judges to hold or prosecute fighters. This decision concerns all those who have chosen the road of struggle, reminding us that we should not give an inch of our space nor a drop of our saliva.

WE ARE STANDING IN SOLIDARITY WITH ANARCHIST BABIS TSILIANIDIS

LETS DESTROY THE BOSSES PLANNINGS LETS PASS TO THE ATTACK