Translated by act for freedom now 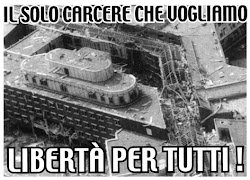 Davide, at first detained in the Sardinian jail of Buoncammino, has been involved in struggle against the prison system for a long time. This is one of the reasons why last summer he was moved to a prison in Sicily, away from his loved ones. But he remains determined to continue the struggle and not to give in to the prison administration blackmails.

It was an immense joy for me to take part in the struggle, even from the solitary confinement, within the mobilization of September. It was a great start, which allowed us to lay the foundations of a trajectory of struggle we’re trying to build. The prisons involved were not numerous because, in my opinion, there was not enough time to spread the proposal. We prisoners can give a very important contribution in spreading the call for the second mobilization, which will take place in a few months. We can tell all our acquaintances, friends and relatives detained in other jails about the initiative and let the comrades outside know to whom they can send the pamphlet     ‘Il morso del serpente’ [The Snake’s Bite], so that it can be spread as much as possible. Our goal is to reach a strong unity in order to get our claims through the struggle, without mediations or compromises with the institutions, which would be the end of the struggle itself. Power uses the tactic of managing us, controlling us and blackmailing us even more! We must not fear the reprisals of the disciplinary board, on the contrary it is only right that it is abolished! If they treat us worse than animals (with all due respect for the animals), how they expect us to behave? For any disciplinary measure they inflict on us because we struggle against the prison torturer monster, the intervention of the ‘prison legal aid’, which is a group of lawyers especially meant to oppose the dynamics of punishment (and we thank the comrades for this very important support!) and above all the response from the collective and the outside struggle for those who end up in the revengeful and miserable circuit of punishment  (transfers, 14bis, various disciplinary measures) and the ‘internal tribunal of execution’ (the disciplinary board), all this – in the many forms of solidarity – will allow us to effectively oppose the logic of blackmail.

Note: in one of his letters, Davide (who is subjected to article14bis [special surveillance regime]) tells us that he was not delivered cards against the TAV and in solidarity with the comrades arrested on 9th December because these were considered of ‘anarco-insurrectionalist tendency’.