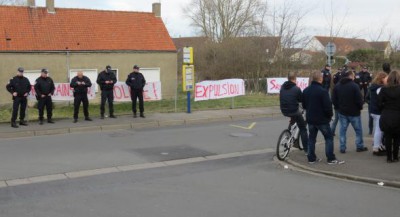 Tomorrow, Friday 21st Feb, fascists have called a day and evening demonstration outside a new squat in Coulogne. This is the accumulation of five days of heavy fascist activity in the Calais area.

In the last few months a racist anti-migrant group, ‘Sauvons Calais’ have mobilised in Calais to ‘defend Calais from migrants’. Last week people squatted a farm house in Coulogne and since Sunday evening groups of up to 50 fascists and angry neighbours have had almost a constant presence outside the building.

The fascist’s actions this week have ranged from shouting insults at the people inside, throwing rocks, fireworks and standing there for hours on end. At 7am on Tuesday morning three fascists, who had been out drinking all night tried to break into the squat with a sledge hammer. Two of them were arrested. Members of the demonstration have also been recorded making death threats against migrants.

Today they are back outside again threatening the people inside. The fascists ‘Sauvons Calais’ facebook account has been used to mobilise people to descend on the squat.

The squat became visible last week and the squatters have gained legal status for their occupation.

As the days have gone on it seems that the number of fascists coming is increasing. The situation is getting more hostile rather than calming down. This is unprecedented fascist action in Calais. People are asking for support tomorrow and in the coming weeks…

Published on the CMS blog: https://calaismigrantsolidarity.wordpress.com/2014/02/20/fascists-mobilise-against-squatters/