From informa-azione.info
Translated by act for freedom now 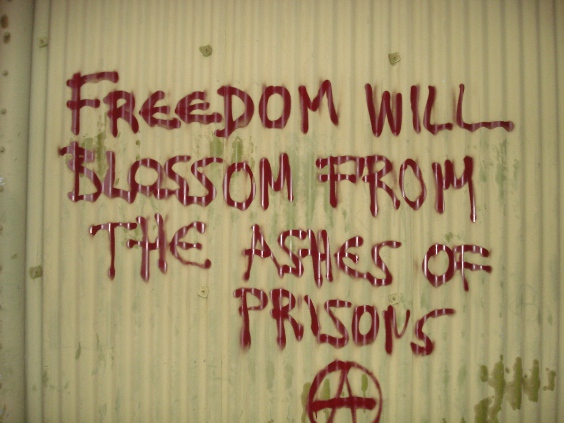 We receive and transmit:

On Sunday 9th March, for over 3 hours, a few dozen comrades expressed solidarity with Claudio, Nicola, Alfredo and Adriano, locked up in the high surveillance unit of the prison of Ferrara, and with all the other prisoners.

Claudio, who was arrested on 9th December 2013 along with Chiara, Niccolò and Mattia on charges of terrorism, was transferred to this disgusting prison over a month ago. Initially he was detained in solitary confinement, but the prison administration recently made the miserable concession of allowing him to see Adriano. The situation our comrade is enduring remains very serious, and for this reason on Sunday we went back outside those walls to show we are close to him.

Music, speeches, slogans and fireworks broke isolation for a few hours and made the comrades feel that they are not alone.

As we were dispersing, we realized that some unknown person in uniform had cut two tyres of a comrade’s car… but we had spare tyres! Certainly this episode won’t deter us from bringing our solidarity to our imprisoned comrades, with more anger and strength!