From RadioAzioneTranslated from Italian by act for freedom now

This Friday 28th November we decided to attack a public transport vehicle aimed at calling a black December of actions in memory of anarchist comrade Sebastian Oversluij, murdered during a failed bank expropriation on 11th December 2013. 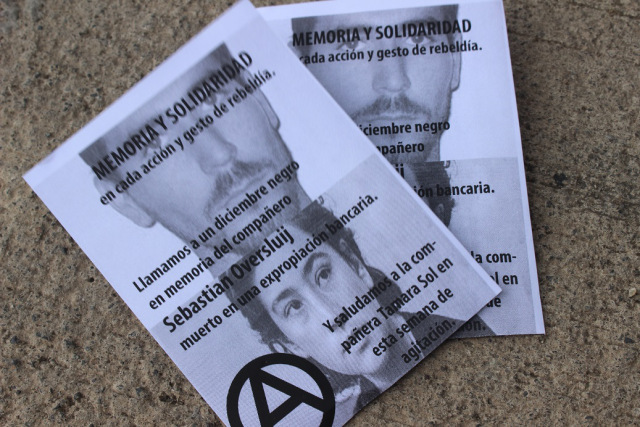 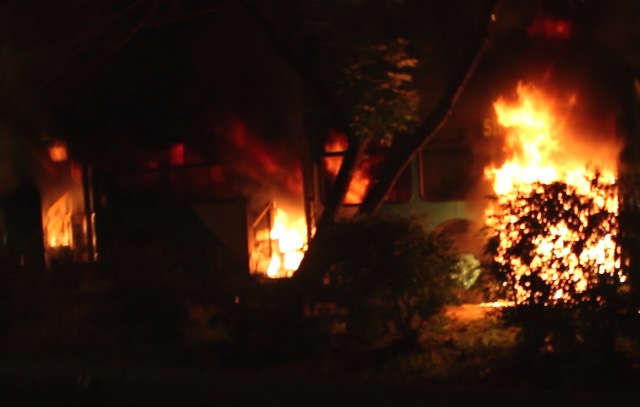 As the bus went up in flames we set off fireworks so that our rage and rebellion would shine even more. This action was also carried out in solidarity with comrade Tamara Sol Vergara, who is currently in the hands of the State.

This is our way of saying that none of our dead or prisoners is forgotten, that any blow from the enemy increases our rage and expresses itself in precise actions against power. The bourgeois media linked the action to the start of the Telethon campaign. That was not the reason, of course, but in any case we are demonstrating our repudiation of those who profit from other people’s misfortune.

This is our contribution to the official figures concerning this festival of hypocrisy. We also want to point out that we’re living in times of great tension, where three people have been arrested for their alleged involvement in the placing of an explosive device in the corridor of a commercial gallery in the metro station of Escuela Militar.

Although we believe that the action was not strategically wise and was more a step back than a contribution, we won’t stop showing solidarity with those who are likely to face one of the hardest trials in recent years. As anti-authoritarians we are for the destruction of the prison society and for this reason our thoughts go to Nataly, Juan and Guillermo, as well as Hans Niemeyer, Monica Caballero, Francisco Solar, Juan Aliste Vega, Carlos Guitèrrez Quiduleo, Marcelo Villarroel and Freddy Fuentevilla.

We won’t forget the two weichafe [mapuche fighters], José Quintriqueo and Victor Mendoza Collìo, recently murdered in southern conflict zones. Memory and struggle in their names. We also want to mention that four young people were arrested this week for possession of an incendiary device and rioting; we send them a warm embrace of solidarity and fire and take the chance to say that every precaution should be taken during actions so as to escape the blows of the enemy.

It is worth pointing out that for us public transport is one of the ways that the State and Capital allow the exploited devoured by the system to reach their alienating places of work and perform the tasks imposed by a system that seeks to dominate every single aspect of our lives. Burning a bus challenges the logic of the system immediately, it signifies sabotaging the circulation of human merchandise, interrupting the totalizing mechanism of the city.

We call for a black December in memory of comrade Sebastiàn Oversluij.

A warm embrace to the comrades who attacked the PDI!Mauricio Morales and Sebastian Oversluij present !!!