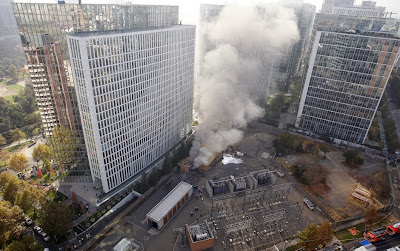 An Informal Anarchist Federation (FAI) – International Revolutionary Front (IRF) cell based in Chile calling itself Grupo Kapibara have released a communique claiming responsibility for an incendiary attack against a substation of the electricity provider Chilectra in Santiago on 06.05.15. According to the communique a timed incendiary device containing 1.2 liters of gasoline and 400 grams of polystyrene was placed in a room inside the substation. The timing mechanism was set to activate half an hour after placement of the device but for unknown reasons activation did not occur until several hours later.

The communique states that the action was carried out in order to strike a destructive blow against the techno-industrial system in defense of Mother Earth. The communique also contains expressions of solidarity with the anarchist nihilist prisoner Spyros Mandylas held captive in Greece, the comrades Nataly, Juan and Guillermo on hunger strike in Chile and the comrades Sol, Tato and Javier, also imprisoned in Chile. Mention is also made of fallen anarchist Punky Mauri who died in 2009 while attempting to place a bomb at the prison warden’s school in Santiago, Chile.