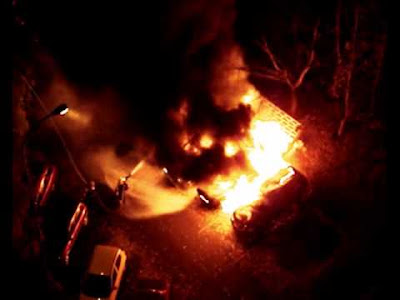 Network of Revolutionary Cells / SRB have conducted another arson attack at a Řízkárna restaurant in Prague. At dawn on Friday, June 26, another car was torched at Řízkárny. Responsibility for the sabotage is claimed by N95 Cell. V. Krulec acquired cars and other equipment for his restaurant via the unpaid work of his employees. The sabotage was carried out in order to decommission the car so that he could not use it for the further exploitation and robbery of workers.

Sabotage is both a means of defense and of attack. It is one of many methods that can be accessed by angry proletarians in the fight against the capitalist filth.

(via revolucnibunky, translated by Insurrection News)