In the early hours of Saturday, July 4, 2015 we torched a police car outside the Praha-Bubny police station. This was in response to the police and state repression against anarchists. Since April 28, 2015 when the police launched ‘Operation Fenix‘, four anarchists have been arrested and held in custody. Wild Heart Cell sends a message with this sabotage: We will not tolerate such violence by the state and we will fight against it!

With the launch of ‘Operation Fenix’ cops have declared war against the anarchist movement. They thought they could scare us into giving up. They have made a mistake, we will never give up. We are moving into counterattack.

They want to suffocate the resistance but they only add more fuel to the fire. 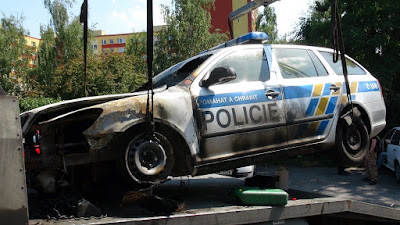 On Wednesday, July 1st, 2015, a police car was set on fire in Prague. It occurred on the outskirts of the park near the Srašnická metro station. As part of the ongoing struggle an SRB cell attacked the police car to send a fiery greeting to Alešem Kočím. For his anarchist beliefs in class warfare, Alešem fell into the hands of the state. On the 28th April, 2015 he was detained by the police during ‘Operation Fenix’ and was subsequently charged with possession of illegal weapons. He now sits in custody as a prisoner of the state.

The state and it’s institutions have a huge arsenal of weapons and have created a monopoly on their use. They constantly use them in order to keep the capitalist construct in motion – the network of exploitative and oppressive relations. Anarchists do not accept the state’s monopoly on weapons. Anarchist praxis confronts the values the defend and reproduce state violence. State violence against anarchists builds insurgent violence.

Alešem Kočím is an anarchist who disrupted the state’s monopoly on the use of weapons by being armed. SRB supports such a stance. While Alešem is in the hands of the enemy this limits his potential for future struggle but we do not intend to accept this situation. Incendiary words, fire, weapons and explosives – it’s all part of our struggle. Revolutionary struggle against the violence perpetrated by the state to preserve the misery of capitalism. So far we have only used fire to ignite cars. Next time however will not be the same.