This is far from being a first … We learn in a statement of August 26, 2015, that a police agent infiltrated the autonomous area and ‘Rote Flora’ between 2009 and 2012. The undercover cop Maria Böhmichen rubbed shoulders with anti-capitalist activists /

anarchists during this period and embedded herself in their private spaces. Under the name of “Maria Block”, she has participated in several international mobilizations over recent years, such as during the protests against the UN climate conference in Copenhagen (Denmark) in 2009, during the ‘No Border’ camps on the island of Lesbos (Greece) in 2009 and in Brussels (Belgium) in 2010.

Besides having created bonds of “friendship” and having had at least one sexual relationship within the community, she was able to gain access to private areas of activists and infiltrate the organization and execution of direct actions (not penalised). She also participated actively in meetings, demonstrations and events concerning anti-fascism and anti-racism, as well as in anti-nuclear and environmentalist struggles.

This new case of an undercover cop comes less than a year after comrades exposed the infiltration of cop Iris Plate into the autonomous milieu in Hamburg in December 2014. This one had been embedded for six years, between 2000 and 2006, under the name of Iris Schneider. So this is the second case of spookery under the leadership of Senator of the Interior Neumann of the Social Democratic Party (SPD). 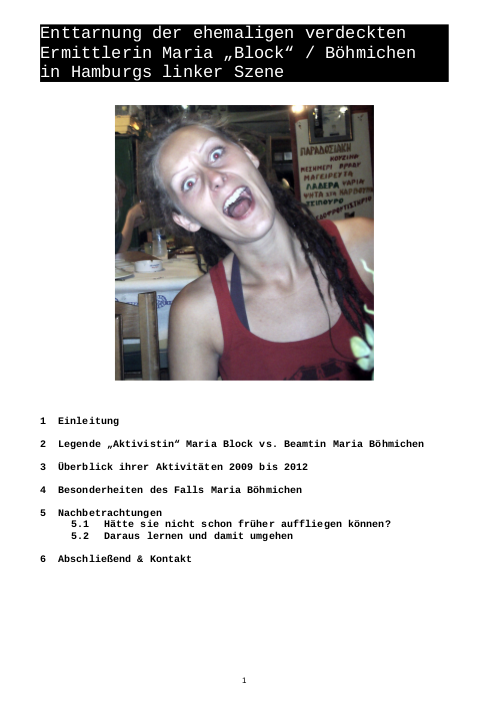