15 worthy descendants of Leonidas, carrying ancient-Greek ideas and values, overflowing with courage and valor, defending the narrows of Thermopiles while yelling with voices loud and proud “MOLON LAVE,” (come and get it), fighting for their country and faith, managed to overcome the great enemy…a Nigerian student!

“They say they are Greeks and democrats, descendants of Pericles, long live the illusions!”
Panx Romana 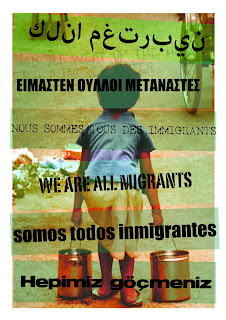 No one in the world wants to leave friends and family behind to migrate to a foreign country. No person who has a decent job prefers to leave for worse working conditions and lower salaries. No one prefers to experience racism and humiliation in comparison to the security offered to him by his home. Few are those who even have a choice when it comes to migration. Even fewer are those who would still migrate if an alternate, viable solution was presented to them to improve the lives of themselves and those they love.

According to a survey of Fileleftheros,

85% of Greek Cypriots agree that migration causes an increase in unemployment,
81% say it increases criminality,
70% say it causes more problems than opportunities,
73% say it causes insecurity to citizens,
And 61% say that it is the main cause for illnesses being transferred to Cyprus

45% stated that they have no contact with migrants living in Cyprus.

England, France, Holland, Spain, Portugal, and many other western, ‘developed’ countries maintained colonies in many of the countries from which migrants tend to come from these days. They took advantage of the natural resources, the economy, and of course, the large workforce of ‘third world’ countries. Western countries grew rich while they submerged ‘developing’ countries in misery, blood and debt. A good example of this is the imposition of the English empire on India, and the colonization of Congo by the Belgians, one of the roughest in modern history.

The ‘third world,’ remains oppressed today. Many countries are tortured by clashes within the community, most of which were caused by the ‘developed’ countries for their own gain. Others are knee-deep in debt from the loans provided by ‘developed’ organisms such as the International Monetary Fund (e.g. Argentina). In all these countries, in Africa, Asia and Latin America, ‘western’ multinationals exploit the cheap workforce, mostly in awful working conditions with minimal rights (for example the company GAP in Indonesia). At the same time, these companies use up the natural resources of these countries, with the obvious example being the chopping down of enormous areas of the Amazon Rain Forest (in Brazil) to make soy plantations for companies such as McDonalds.

“All foreigners should leave, apart from the necessary labour force” is what some Cypriots demand. Which is the necessary labour force for them however? The woman for the Philippines who cleans their house and watches their children, the Bulgarian men working to build their houses, the woman from Sri Lanka who takes care of granny, the Pakistanis who clean their farms, and the Romanian women for the cabarets, in which they enjoy spending their time.

The people from these countries are often unemployed, poor, oppressed, or unable to take care of their families. The same people are welcomed into ‘developed’ countries with such strong dislike and hatred. We want to ‘clean’ Cyprus from foreigners but we exploit them, giving them pennies for salaries and no rights. We want to stop spending allowances for migrants, but we want them to work in all the jobs that are ‘too low’ for us: house-helpers, construction sites, nannies, etc.

Migrants are not objects, nor machines. They are humans, and each of them carries a story with him/her, most of the time rougher than we can even imagine. They need our help and solidarity. People in general need to understand the basic reasons which lead to migration currents of enormous size. We must finally decide to fight the root of the problem and not its symptoms. We must be the ones to put an end to the exploitation and oppression which we cause.