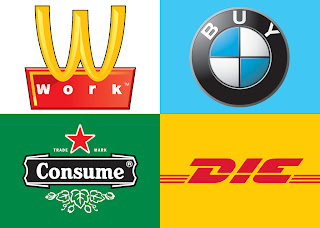 “You are at the store with sports goods. You can’t decide between a new jacket or a racket. Who do you ask? No one. You buy both and get it over with. Without doubt, you are living the best period of your life.”

From an advertisement in a Spanish newspaper.
Over-consumerism, economic growth, advertisements, sponsors, shopping malls, shopping therapies, addiction to shopping and products. This is the modern “culture” of the developed countries of the world, amongst which one will also find Cyprus. In this culture, there is no place for spontaneous entertainment, feelings and thirst for life. The only thing left is passion for consuming.
What is (over-)consumerism? It is the buying of products seen on a commercial and realizing they are useless only days later. It is the lingering feeling of dissatisfaction. The constant need for more, bigger, better. The creation of consciences which confuse reality with commercial, “wanting,” with needing. Moreover, it is the belief that lack of communication with our self and those around us, even our flaws, are covered and hidden with buying certain goods.
For the citizens of “developed” countries to be able to enjoy the goods produced by millions of workers working in awful conditions in poor countries, it constantly requires more money on their part. So, they accept to work in bad and flexible working conditions, to work more so as to earn more. They enjoy less time with their friends, children and themselves then what could truly make them happy.
The society of consuming looks down both on work and the value of products, since the only thing that counts in the human relations is the pattern of production – consuming. The labor and the uniqueness of each product do not matter before the “monster” of mass production.
The society of consuming puts “needs over resources, profits over people, the present over the future.”
Over-consumerism does not only destroy human lives, but nature as well. Reusing, recycling and the use of renewable energy sources are steps in the right way, but this is not enough. If we truly want to protect the environment and natural resources we must make drastic changes to our way of life.
The retrieval of resources, the production, the movement and transport of products which we demand and consume is the number one cause of the environmental disaster we experience every day. From the polluting toy factories in Asia, to the dropping of tons of garbage into the oceans, to the chopping down of thousands of trees in the Amazon on the altar of soy production for the immense amounts of foods (and mostly meat) we eat, the destruction and pollution of the environment has its roots in the consumerist society of man.
800 million people live in conditions of extreme poverty, 40% of foods produced are trashed without being eaten, 1/3 of fish caught are returned to the sea because they don’t fulfill the aesthetic specifications for the market, 300 million people in northern countries are obese.
70% of decisions regarding a purchase are taken inside the store.
One third of European consumers is addicted from shopping and has serious problems with spontaneous purchases and loss of self control when it comes to spending.
Daily, we are exposed to 3000 commercials.
The list of IKEA is the most “read” book in the world: 175 million lists printed each year, in 35 countries and 27 languages.
80% of those who enter a shopping mall eventually buy something.
Source of information:
http://sporos.org