In Besançon as in many other cities (Montpellier, Nantes, Rennes or Toulouse), several facs were blocked on Thursday, March 15, a day strike against the latest education reforms and higher education.

But in Besançon, the third night of the occupation of the humanities faculty was particularly wild, like several inscriptions on the walls of the college from the start of movement: “Let’s be wild; We are nothing let’s be crazy; What do you learn in college, if not to submit?; We are not students, we are delinquents; Let’s live let’s block everything.” To the usual tags done during the occupations at night or in the middle of a “normal” day of classes was added the destruction of various instruments of technological alienation: more than 40 computer screens were smashed in three computer rooms in the Mégevand area; in other rooms overhead projectors were torn from the ceiling, damaged and stolen. At the Arsenal area rooms were sprayed with extinguishers. In addition, food and beverage dispensers and coffee machines were regularly emptied and ransacked. The damage amounts to tens of thousands of euros.

In addition, the offices of the Dean of literature André Mariage and head of the administrative staff Thierry Liégeois, were tagged and their locks glued. A direct answer to their pressure and threats of disciplinary action against certain components of the “movement” which held an information table at the beginning of the week? Or would it be for the disciplinary boards last year against two students opposed to selection? Or the France Telecom management of the new head of the administrative staff? One thing sure is that there is no lack of reasons.

Still, the unions, absent when it comes to struggle and responding to repression but always present when it comes to saving their ass with the administration, did a communique of dissociation and a small cordial interview in the dean’s office, just to reaffirm once and for all that they are, today as in May 68, well and truly enemies of all those in revolt against the social order, in college as elsewhere …It is important to remember the role of domestication and alienation that the university plays. To struggle against selection, that has always been set up, although it is constantly getting more drastic and formalized, is not enough for us. Research, whether private or public, has the aim of strengthening this society of exploitation, control and submission. For example, the sector of the Automatic Processing of Languages ​​(in the laboratory of the CRIT), boasted a few weeks ago of its collaboration with the army. We could list the multiple studies in geography, aimed at meeting the needs of architects, urban planners and real estate developers in their process of gentrification in Besançon: for example, studies going in this direction have recently been carried out, on the one hand about flyposting in public spaces, in order to clean up the city to make it an ever cleaner space more conducive to mass consumption and the well-being of the rich, on the other hand about the means of urban transport used by the people, seeking to make travel more fluid, labelled “eco-friendly” (bicycles and car-sharing, trams, buses …) by setting up “multimodal poles”, which is very practical for increasing rents and throwing out the poor …

In short, the educational and academic world, through its control, by instilling obedience, discipline and work, serves first of all to prepare the soldiers of the economy of the future and to keep this world of misery and exploitation going.

50 years ago like today, death to the State and its tools of domestication! 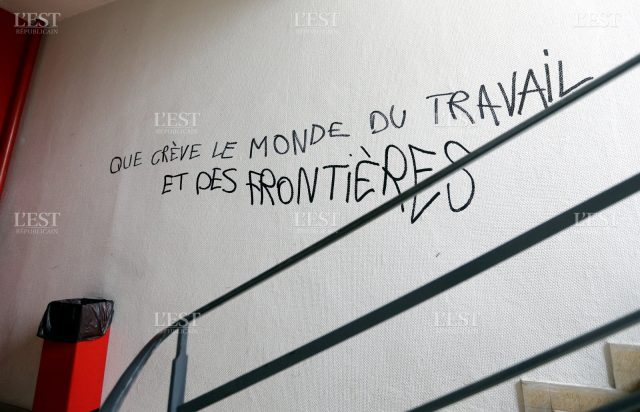