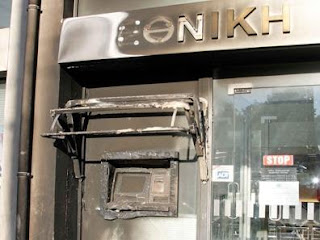 In the night of Tuesday October 28, and by the time the dressed up with festivity national misery, we selected to turn into ashes for once again, the national bank on Venizelou street at Triandria, Thessaloniki.

Passing by quickly the dominant rhetoric of a financial crisis and the emergence of a new “socialism”, the ashes we leave behind us yell that the mechanism of exploitation don’t collapse on their own. Besides, the only ones losing in these occasional crisis are not the gangs of the big robbers and usurers that for centuries have been accumulating wealth and power, but the masses of the repressed. Just think of the millions of deads left behind at the second world war so as this wonderful capitalist system could recover from the ’29’s crash.

However, opposite to the financial colossi that kneel one after the other, stand the insurgents of the world. Opposite to the wage slaves that mind their own deposits stand with dignity the comrades Giannis Dimitrakis and Giorgos Voutsis-Vogiatzis that are found in prison for their selection to expropriate a few of what’s stolen from us every day by the banks. Opposite to the generalized apathy and willful servitude the revolutionary action spreads.

Lastly, we can accept the national bank’s gratitude for our help to reduce its subsidiaries, so as to strive accordingly to the crisis.

PS. We need to make clear that the actions offensive against the existant don’t want nor need comrades in prison or on the run. We affirm though, that as long as this idiomorphic prison condition of I. Nikolaou, D. Syrianou and K. Halazas stretches, our rage overflows, with all that this may involve.