(Dedicated to our comrade who was unable to join us today, still recovering in hospital. See you in the streets!)

Riot police march in front of a wall-painted slogan reading “The troika [meaning the IMF, EU and ECB] is not an image on your TV screens; responses are given in the streets”. Athens, 17/11/2010.

It will take us a little while to comprehend today’s events in Athens – and surely, this is not the best moment to do so – writing these lines after a full twelve hours in the streets. But still, some first thoughts are of order. What happened today was important. First, today’s demonstration had a very peculiar feel to it. The largest Polytechnic uprising commemorative demonstration in more than a decade (30,000 according to the police, around double in real numbers). A very tense feeling in the air. Even before the demo set off, clashes with the youth branch of PASOK – the social-democrat party in power – who had the nerve to try join the demonstration. The police on the sides of the march, with their hands on the trigger of the tear-gas guns the entire time. People waiting for something to happen on both ends: our end, and on that of the police.
And something did happen. The most intense and populous demonstration Athens has seen since May 5th. The police charging ahead whenever they could, whenever they would isolate people off the main block of the demonstration. People fighting back, during the demo and then, late in the night, in Exarcheia. But that peculiar feeling hasn’t faded: we are still waiting something will happen… Tonight was the last day of a long summer. Tomorrow is the first day of a strange winter – hopefully, a beautiful winter.

from the greek streets blog

Tonight saw the largest Polytechnic uprising demonstration in Athens in at least a decade, with reports of 50-60,000 taking to the streets. We have unconfirmed reports of a demonstration being injured by tear gas in the face. At least 25-30 people have been detained so far. 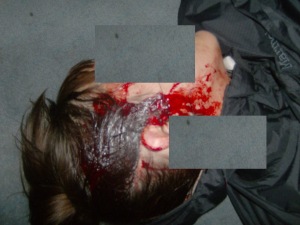 UPDATE, 00.48. Tests so far on the injured comrade show there are no broken bones and no internal bleeding. She is, however, very badly hit in the face by the cops and the doctors have asked for her to stay in hospital for another 24 hours at least. Cops had followed her to hospital, harassed her and tried to interrogate her, only to back off when other comrades arrived. At the time of writing (00.45) the cops have left the hospital.
What follows is a compilation of accounts of comrades who were at tonight’s demonstration in central Athens, close to the injured activist and whose reports are verified and trustworthy. Please spread. We will post more information here, as it comes.
The events unfolded toward the end of tonight’s demonstration against the presence of representatives of the IMF in central Athens. As we were marching at the last block of the demonstration on Patision Avenue, having left Omonoia square and heading back toward the Polytechnic, a number of “Delta” motorcycle police appeared at the back of the demonstration. They roared their engines and charged toward the crowd. People started running toward the Polytechnic. The delta managed to get hold of a female American activist who was at the last part of the demonstration. They knocked down, kicked her and stamped her head. She was knocked semi-unconscious, taken inside the Polytechnic by other comrades and a few moments later, transported to a central Athens hospital.
We are currently waiting to hear back from the doctors as of the state of her health. Her injuries are serious, but in no case life-threatening.