Early this morning around 4am our friend and comrade Will Van Spronsen was shot and killed by the Tacoma police. All we know about what lead up to this comes from the cops, who are notoriously corrupt and unreliable sources for such a narrative.

The story that we do have is that Will attempted to set fire to several vehicles, outbuildings and a propane tank outside the Northwest Detention Center in Tacoma which houses hundreds of immigrants awaiting hearings or deportations. He successfully set one vehicle on fire and then exchanged gunfire with Tacoma police officers who fatally shot him. He was pronounced dead on the scene.

We find his actions inspiring. The vehicles outside the detention facility are used to forcibly remove people from their homes and deport them, often to situations where they will face severe danger or death. Those vehicles being destroyed is only a start of what is needed. We wish the fires Will set had freed all the inmates and razed the entire Northwest Detention Center to the ground. And we miss our friend and wish from the bottom of our hearts that his action had not ended in his death.

Will Van Spronsen was a long-time anarchist, anti-fascist and a kind, loving person. Here in Olympia some of us remember him as a skilled tarp structure builder from the Occupy encampment in 2011. Others remember him from the protests outside the NWDC last summer where he was accused of lunging at a cop and wrapping his arms around the officer’s neck and shoulders, as the officer was trying to arrest a 17-year-old protester. The very next day when he was released from jail he came right back to the encampment outside the center to support the other protesters. He is also remembered as a patient and thoughtful listener who was always willing to hear people out.

We are grief stricken, inspired and enraged by what occurred early this morning. ICE imprisons, tortures and deports hundreds of thousands of people and the brutality and scale of their harm is only escalating. We need every form of resistance, solidarity and passion to fight against ICE and the borders that they defend. Will gave his life fighting ICE we may never know what specifically was going through his head in the last hours of his life but we know that the NWDC must be destroyed and the prisoners must be freed. We do not need heroes, only friends and comrades. Will was simply a human being, and we wish that he was still with us. It’s doubtless that the cops and the media will attempt to paint him as some sort of monster, but in reality he was a comrade who fought for many years for what he believed in and this morning he was killed doing what he loved; fighting for a better world. 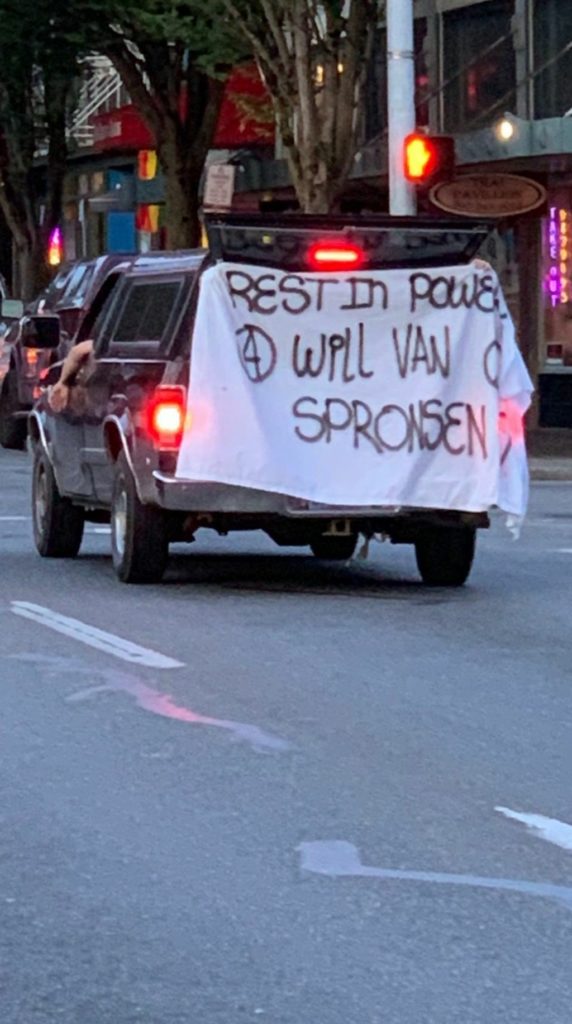 This evening around 8pm roughly 30 anarchists gathered at Percival landing in Olympia WA to remember Will Van Spronsen and to oppose ICE. We held road flares and banners reading “Rest In Power Will Van Spronsen” “Abolish ICE” “RIP Will” “Fire to the Prisons” and “Stop Deportation End Incarceration.” We shared stories and memories of Will with each other, laughed, and cried. Some people split off and plastered downtown Olympia with “Immigrants Welcome” stickers, while others drove circles around downtown flying the “Rest in Power Will” from the back of a truck.