“Over the past week situations of extremely fascistic behaviour have taken place in the “dukedom” of Korinthos’ jails. We use the word Dukedom, because chairmen, sergeants, step-sergeants, employees are nearly all residents in the Corinthian area, some of them with the same surname, who obviously consider the jail their “privately-owned family manor”. On 3rd January 2011 one of the persons who lives in our cell came back from outside (after the jail authorities’ permission to meet his family for the Christmas vacation) and instead of coming back to our cell, – as always happens after permits -, where all his personal belongings are, the guards lock him in another cell where he sleeps on the floor. In his place (and bed) they bring a prisoner who has just arrived from another jail. We reacted intensely, demanding that they bring our cellmate back into our cell. Then, the chief-sergeant Mr. Sotirios Tziavikos (a member of the famous Tziavikos’ people-guards Family) – in order to “show who is boss” and that he does not stand any protests or “demands” from the prisoners’ side – also ordered that the other two of us leave the cell and be removed to the block. Of course we refused to move, saying that the only way to remove us is to take us to the punishment cells … The chief- sear gent ordered us to pick up our personal stuff, while informing us that “he is boss”. Because of Dignity – which the people-guards do not have and that’s why they do not understand it – we refused to obey his orders again, contesting the self evident and basic: namely, the capacity to chose (as much as someone can talk about “choice” inside the wretched conditions of imprisonment) the people with whom we live, refusing to be treated like objects that are put on shelves anyway and whenever the people-guards want it. Two days later, on Wednesday 5th, during the afternoon, when the jail shuts down, the people-guards, after locking up the cells, took one of our cellmates into the corridor, put handcuffs on him and started beating him up then threw him into the punishment block. Of course, we all understood how different the results and situation would have been if the opposite had happened … The report of these events is the result of what our dignity orders us to do because we do not expect anything, nor beg anything from any official “authority on duty”. Moreover, the authorities have proved in action … how “emotional” they are against prisoners – outcasts, poor devils, immigrants and those who doubt their authority.”

Letter from the prisoner Charalambos Avramidis
From the moment I stepped out of the cell, I was attacked without any reason by the people-guards Mr. Georgios Michos, Mr. Vasilios Kotsis and Mr. Marinos Stavrou. While they were beating me up and I saw the handcuffs they were holding, I understood at once what was to follow for me while I was in their hands. Because in the eyes of a people-guard prisoners are just body-sacks. While I was being attacked by the three people-guards, it was reasonable to resist to them. I know very well that other prisoners have also passed from here and been tortured on a higher level than me. Then they tied me up and beat me “carefully”, namely on the body and legs and not on the face. After they put the handcuffs on me they trailed me along the floor for 3 – 4 metres like a sack of muck. Sometime I made it to sit up and then the second round started. Mr. Michos grasped me with a headlock and started punching me on my left ear – which is still humming and I have intense pain – and on my sides. They threw me in a punishment-cell-barrack full of dirt and waste water, with a wretched mattress on the dirty floor. The humidity was making my injuries more painful. During the night I did not sleep because I know, from other prisoners who have been in the same position, what can happen during the night … The people-guards started laughing at me, saying “oh, come on Charalambos, what else could Michos do, he was only following orders” – orders obviously coming from the chief-torturer – chief-sergeant -, or “I should have been on duty that night, then you’d have seen what could happen to you”, or they also told me “ehhhh, it’s ok, you only got a few, you should have got more”. The immediate reaction and solidarity from my cellmates and because the people-guards wanted “the event to remain inside the jail”, made them start behaving “sweet” to the prisoners. But, no matter how much perfume they put on, they will always stink like pigs! After three days in the punishment cell they transferred me to a dormitory, where instead of 10, there are 26 persons, some of them sleeping two to a bed, telling me that in ten days I will be back in my cell …

7th January 2011
On Sunday, January 9 a solidarity demo was held outside the Corinth prison for Charalambos Avramidis, who was beaten by guards and for the Christoforos  Cortesis, his cell mates Petrov and D. Tsikrikas. Slogans were shouted from inside and outside the prison and written on the walls. The director and the guards got a strong message that bullying and beating does not pass and that we never leave our comrades alone. !!

Here are some photos of the slogans at the entrance of the prison.
(Note: Tziavikos is the 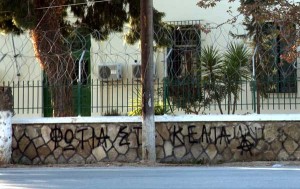