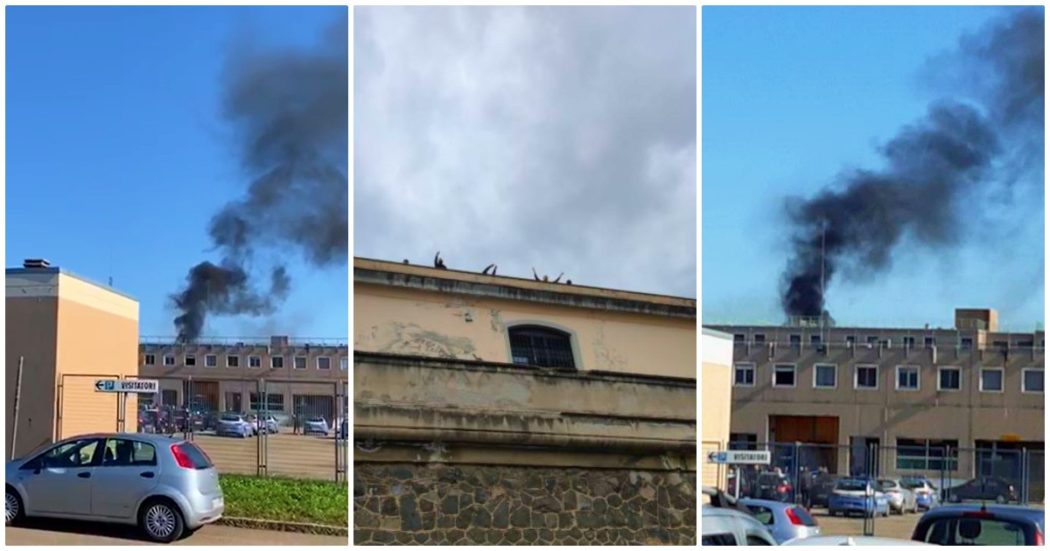 A revolt broke out today, March 8 2020 in the early afternoon, in St Anna prison in Modena.

The fact was clearly seen from outside as three columns of smoke rose from the wings of the structure, as well as the significant coming and going of guards, and the presence of a police helicopter guarding the area.

Various relatives of the prisoners gathered, those in solidarity and other spectators from the surrounding area, seeing the GOM arriving in antiriot gear and distinctly hearing some shots.

After some attempt at removal by the police, people still gathered in front of the prison, where vans, ambulances and prison minibuses were seen parading back and forth.

At some point, after several requests for news by relatives, the Major of the Prison and an emissary from the prison director came out and told them that during negotiations with the rebels barricaded in the wing they had given them back their mobile phones in order to let them call the their loved ones. So they asked family members to answer the phone and convince them to come out.

Towards the evening, in front of a large antiriot contingent, cops emerged escorting some of the prisoners, striking them while handcuffed; some were on stretchers.

Already around that time some had escorted a bag containing a dead body.

It was possible to talk to some of the prisoners in the wing next to the field during the events, they gave news of transfers and that they would be the last to be transferred from the section, saying that they were being heavily beaten.

80 people have been transferred, apparently to Bologna, Reggio Emilia, Parma, Piacenza and Ascoli by at least four prison buses and other vans.

The media of the regime reconstructed the affair as having started off from the workers’ section then spread throughout the whole prison where the prisoners would have burned mattresses and barricaded themselves in at least one of the structures, and apparently from some video seen taking possession of the armoury.

Three people died during the revolt. Their identity and the exact cause of death has not been released. Another two are in intensive care.

There is talk of serious damage to the structure and the destruction of documents. Important causes of the outbreak of the revolt would be the shutdown of visits and lack of mediators due to THE virus, as well as health safety inside the structure.

Late in the evening there seemed to be rebels barricaded; THE SITUATION IS EVOLVING CONTINUALLY.