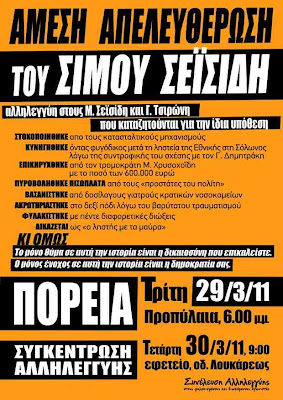 POSTER FOR SIMOS SEISIDIS
He was TARGETED from the oppressive mechanisms
He was HUNTED as a fugitive after the robbery of the
National bank of Greece on Solonos street because of his
comrade relationship with G.Dimitrakis
He had a BOUNTY placed on his head by the terrorist
M.Chrisohoidis for 600.000 euro
He was SHOT IN THE BACK by the “protectors of the citizen”
He was TORTURED by traitor doctors of state hospitals
He was MUTILATED on the right leg because of his heavy injury
He was IMPRISONED with five different prosecutions
He is TRIED as the “robber in black”
BUT STILL
The only victim in this story is the justice you call upon.
The only guilty in this story is your democracy.
Solidarity to M.Seisidis and G.Tsironis
Who are wanted for the same case
DEMO
TUESDAY 29/3/2011
PROPILLEA
ATHENS
SOLIDARITY ASEMBLY ATHENS