A Photo Tour No Travel Agency Would Dare Offer 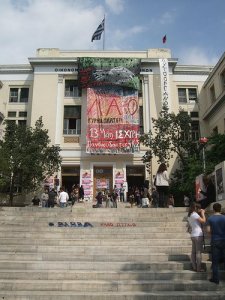 A photo of the ASOEE, the once occupied Economics university, where I stayed in December. Unlike the historically radical Polytechnic, the ASOEE was a center to experiment and challenge everyday life instead of planning actions in the street. In the ASOEE, there was a collective restaurant, a computer lab where many of December’s texts were written and distributed, and a communal sleeping area. Like all the comrades who participated in the occupation, I have a hard time passing by the building now that it has been returned to its previous use as a site for the social reproduction of capitalist relations. But, as a middle finger to the reproduction of everyday life, revolutionary graffiti from December still sticks to the walls of the building! 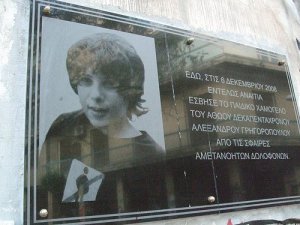 A photo memorial of Alexis found by his memorial close to Exarchia square. The corner where he was killed, where the photo is hung, is now officially named after the murdered teenager.

A wider shot of Alexis’ memorial. Letters from his friends written in December are still stapled to the wall. Flowers and candles are constantly placed in front of the memorial. 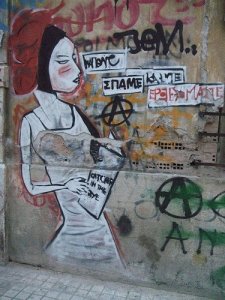 A production painted by an anarchist graffiti crew. The character was painted in the classically downtrodden south of Athens, the birthplace of the Rebetiko subculture, that in recent years has experienced a wave of gentrification. The graffiti crew is known in Athens for painting murals with a political message.

The Skaramagaz squat opened about two months ago in the center of Athens during the squat wave sweeping Greece.