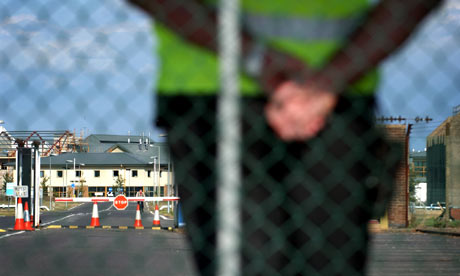 An immigration removal centre was reported to be in a state of chaos yesterday, as at least 50 women entered the fourth day of a hunger strike in protest against their detention and conditions, with ­several reportedly fainting in corridors and almost 20 locked outdoors wearing few clothes.

Yarl’s Wood detention centre in Bedfordshire, which houses 405 women and children, was in lockdown, leaving women in communal spaces without food, water or toilet facilities.

Several women who tried to escape through a window were then locked outside, according to one detainee, including one whose finger was almost severed as she escaped but who had not received medical treatment.

“We have been on hunger strike since Friday protesting about the length of time we have spent in detention here,” said Aisha, who has been in Yarl’s Wood for three months. “We have been locked in the hallway all day – five ladies have fainted because they have not eaten since Friday. No one has come to give them any medical attention.

“I had an asthma attack, but no one would come to give me my inhaler. I’m very weak. But we will stay on hunger strike for as long as it takes.”

Campaigners condemned the response of the authorities at the centre, accusing them of using a “kettling” technique to trap the women.

“The women are currently trapped in an airless hallway,” said Cristel Amiss, of Black Women’s Rape Action Project. “Women should be allowed back into their rooms immediately; there should be an immediate investigation.”

The Home Office confirmed the disturbance, saying that 40 women were involved, and insisted the measures were temporary until the women could be reintegrated into the centre.

“The wellbeing of detainees is of ­paramount concern, which is why healthcare staff are at the scene to monitor developments,” said David Wood, strategic director at the UK Border Agency. “The detainees will be integrated back into the centre at the earliest opportunity.”

The hunger strike is the latest in a series of protests at the facility, which has attracted controversy for detaining women for long periods.

Campaigners say many of the women being detained are also victims of abuse and rape and should not be held while awaiting deportation decisions.

“Over 70% of women in Yarl’s Wood are rape survivors, many are sick and vulnerable,” said Amiss.

“Why are they being punished for raising serious injustices?”

The Home Office denied its practices in detaining immigrants were unfair.

“All detainees are treated with dignity and respect, with access to legal advice and health care facilities,” said Wood.