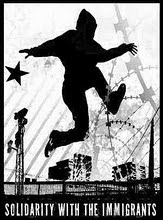 May 2005: A massive police operation, so called operation Notte

On the appeal trial against the Lecce anarchists

So called operation Nottetenpo (Nigh Time) started in May 2005 with a massive police deployment that led to the arrests of 5 anarchists in the Lecce province (southern Italy) and to the investigation of another ten for conspiracy. The comrades had actually been actively engaged in the struggle against the Regina Pacis immigration detention centre of San Foca (Lecce) run by the clergy, which closed down before the beginning of the infamous operation Nottetempo. The tenacious struggle of the local anarchists, in fact, had unveiled the atrocities perpetrated in that prison for immigrants to such a point that the operators of the centre could no longer hide their ignominious activity. Some of them were even put on trial and eventually went abroad, where they carried on their dirty business and managed to repair their reputation.

On the contrary, two of the arrested anarchists spent two years in prison while the others were put under house arrest or subjected to various restrictions. The first grade of the trial concluded in July 2008: as it was impossible for the jury to confirm the existence of a subversive association (article 270bis on conspiracy), they turned to article 416 of the Italian penal code and accused four comrades of forming a ‘criminal association’ (organized crime). Three other comrades were accused of specific crimes and the other eight were acquitted.

Anxious about his career and longing for a promotion, public prosecutor Lino Giorgio did not resign to the fact that his theory on an anarchist clandestine association had been rejected by the jury. For this reason, a few weeks later, he presented an appeal against this sentence in order for another jury to confirm the accusation of conspiracy against the Lecce anarchists.

The sentence of appeal had to be finally pronounced on February 10 2010, but it has once again been postponed following the decision of the jury to examine further ‘evidence’ provided by the public prosecutor. The intention to charge the anarchists involved in this shameful story of repression with yet more serious charges is evident, and it is also clear how the local powerful are determined to silence the entire matter as well as the violence and the abuse inflicted on immigrants by the operators of the Regina Pacis concentration camp. If the latter no longer exists, numerous others can be found all over Italy and everywhere else; but the struggle is also alive, the struggle of those who, inside and outside those concentration camps, believe that the only fate of these places is that of being destroyed along with the fear, hatred, indifference and racism fomented by power in order to create terror and to stir up a war among the exploited.

Solidarity to the Lecce anarchists!