from viva la anarquia, translated by war on society: 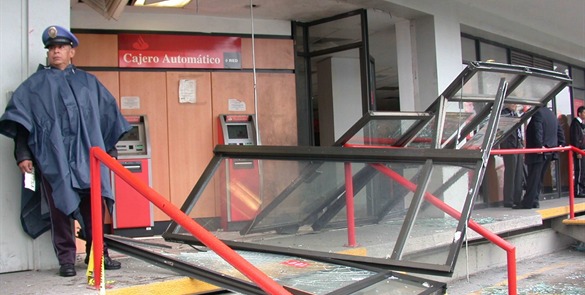 We receive and transmit. Communique:

The first day of this month, a piece of news shocked our consciences. A comrade thousands of miles away from where we are had been wounded in action; his name: Luciano Pitronello.

We know that he continues to be a warrior existing in the conditions that he is in; he who rejected the technology that all the sheep carried to fill even more the pockets of the telecommunications industry, who decided since adolescence to remain in conflict against all authority, who took his life as seemed right to him and as he pleased, he who did not limit himself to words and to curses against the social peace and who took in his hands the decision to make it explode at all costs.

With a fire extinguisher full of black powder you wanted to destroy once again the existing order, for some reason something went wrong and now you are held captive in a hospital with a future yet uncertain.

The press, the authorities and, even more, the Chilean society make fun of your condition, but there is a saying: He who laughs last laughs best. And we laughed to see the shattered bank in which we detonated an explosive charge of a little less than half a kilo of black powder consisting of two canisters of butane gas, a bottle of gasoline and tied tightly together with annealed wire, within the ATM area of the Santander bank in the bleak town of Tultitlan in the State of Mexico, yesterday June 29th.

The frontal structure of the Santander bank left completely torn off, broken windows and the place semi-burnt were our response, our laughter, our revenge, our singular weapon which we programmed and left in the bank which is called Direct Solidarity–like this, without pretexts, without intermediaries, without excuses.

The deafening sound of the explosion last night carried your voice, those of your friends, our voices and those of our unknown comrades in whatever parts of the world.

The inept police observed our action, the damages caused by our improvised explosive device, impotent as always to have not foreseen a similar blow to a bank that now has become a global objective since Tortuga was gravely wounded in the streets of Santiago, so in Chile, Argentina, and now Mexico we have attacked it.

Santander has no escape, because while as long as there are individuals who act in solidarity and arm themselves to take to the streets to illuminate them with fire or with the brilliance of broken glass in Santander’s branches, propaganda by the deed will continue to prevail, the authorities will continue to look at each other without knowing what to do in such situations, so even though we fall prisoner or dead, they cannot stop the war that they have started many centuries ago–to be precise, since the beginning of civilization and agriculture.

Tortuga, this was for you, you fucker!*
Direct solidarity with the anti-social prisoners of Greece, with the eco-anarchists of Switzerland, Mexico and the United States.
Chaos has returned for all those who thought that she was dead.

* “fucker” as a term of endearment – transl.