Yesterday, Bastille Day, a banner was hung along the main parade route reading “The Bastille has fallen, but not Fortress Europe.” And every evening Calais No Borders are holding feasts of free food and music for migrants and all-comers in an open space near the town hall. 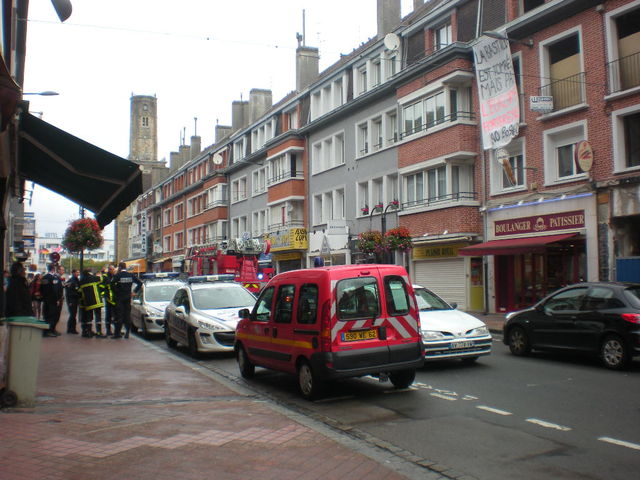 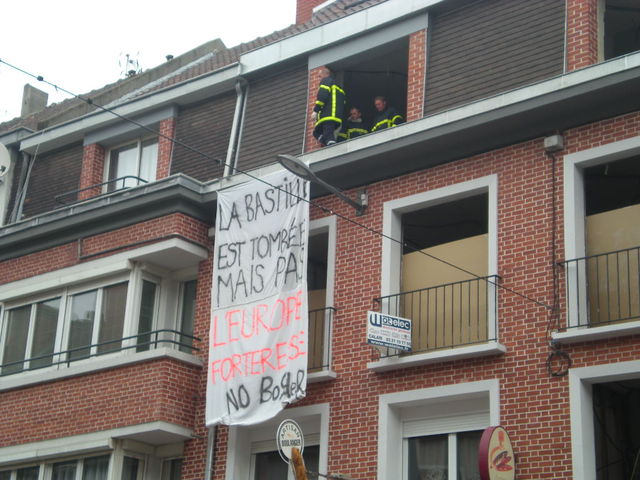 The banner was hung from a building on Rue Royale, the main entertainment street on the route of the 14th July Parade (France’s national day celebrating the revolution, and commemorating the sacking of the Bastille prison fortress). The police spent a long time thinking (?) about how to remove it, then called the fire brigade.

Once again this summer life gets still harder as the state-funded charitable associations which give out food go on their annual holidays. It is hard to cook for yourself when police visit the squats every day and destroy cooking equipment, food and water. So people become largely dependent on the charity food, and now this is down to one not very nutritious meal a day. If you are in a police cell when food is served you have lost your chance to have a meal, and the walk back to Calais is long and tiring.

Last year, despite our lack of access to proper cooking facilities, we operated a mobile kitchen for the jungles and prepared collective meals over a fire at (the now evicted) Africa House. This year we have coordinated a grassroots activist catering collective operation, who will be visiting Calais on a rota. In the conditions of Calais, cooking and sharing food (and music, and comradeship) together is not a “humanitarian” act but a form of direct solidarity and resistance.

Since the 6th July, on a site near the town hall, a Swedish collective has been making breakfast and a hot meal each day to supplement the meal given by the charities. Music provides some entertainment and light relief from the crackdown. Although this is an ‘unauthorised’ distribution, which last year the mayor threatened to disrupt with force, the police have simply been watching us rather unsubtly from an unmarked car.

The food comes largely from donations and what the French call “recuperations”. But more supplies and funds are always needed. We will also need help transporting the food and catering equipment over the next two months – if you have a vehicle and some spare time, please get in touch!

some of no borders