SANTIAGO (Reuters) – Protesters scuffled with police in the Chilean capital on Thursday, the second of a two-day strike against unpopular President Sebastian Pinera marked by sporadic looting, though the linchpin mining sector was not affected.

Youths set fire to piles of trash at some intersections in Santiago and other cities to block traffic, and police used water cannon and tear gas to defuse the latest rash of social unrest against conservative billionaire Pinera’s policies.

The government said hundreds of people had been detained since Wednesday and several police officers were badly injured — two of them shot — as violence flared overnight, when dozens of shops, supermarkets and gas station kiosks were looted and buses damaged.

The government says only a fraction of public sector workers have joined the strike, called by Chile’s main umbrella labor union CUT, which follows huge demonstrations led by students to demand free education and greater distribution of the spoils of a copper price boom in the top world producer.

Public transportation was running, and operations at some of the world’s biggest copper mines were not affected by the protests that also seek to pressure the government into raising wages and revamping the constitution and tax system.

While Latin America’s model economy is seen expanding 6.6 percent this year and is an investor magnet thanks to prudent fiscal and monetary policies, many ordinary Chileans feel they are not sharing in Chile’s economic miracle.

Investors, long used to economic stability, are weighing risk, though markets have taken the protests in stride.

“It’s unlikely to affect direct foreign investment,” said Fernando Soto, an analyst at Banchile Inversiones. “There could be some short-term effects on investment portfolios … out of fear more than anything.” 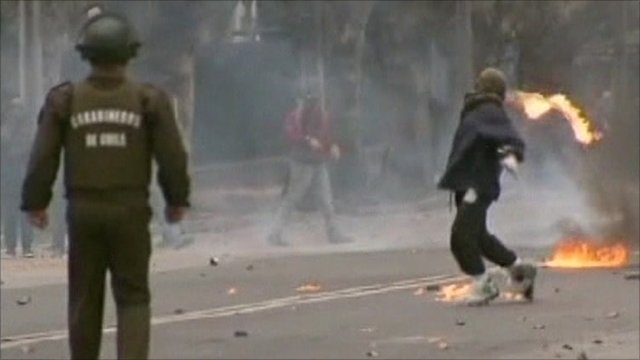