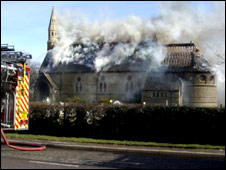 Two boys have been arrested in connection with an arson attack at a 19th Century church in Cambridgeshire.

The boys, aged 14 and 16, from March were arrested on Thursday on suspicion of arson in connection with a fire that destroyed St Mary’s at Westry.

They have since been bailed to return to March police station on 20 April.

The fire broke out on Monday at the church on the outskirts of March. Only the external brickwork remains and the building has been assessed as unsound.

“This terrible tragedy will not affect our regular times of worship,” she said.

Flames were seen coming out of both sides of the church.