SOLIDARITY POSTER SAYS:
…in your dead world, we will always be
the nihilistic fuse that defect…
…creating the conditions
for the coming of cosmic chaos… 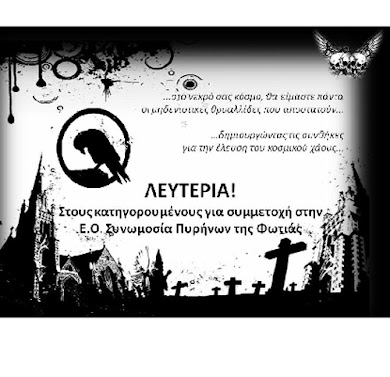 FREEDOM! To those accused for participation in the R.O. Conspiracy of Cells of Fire

Around 6.45 this evening, P.Vlastos (a known underground figure accused of organizing kidnappings among other things) took some prison guards hostage in his attempt to escape. A few members of the C.C.F. (who are in Koridallos because of their trial there on thursday) also participated in the attempt. After the escape attempt failed, they started negotiating, while one of the comrades of the C.C.F. made a statement to the media that they participated in the escape attempt but do not want to negotiate with cops, but want to publicize the horrible conditions in Koridallos prison.
The comrade mentioned that five members of C.C.F. and Vlastos tried to escape during visiting hours.
Cops of all kinds surrounded the prison and closed off the inside in order for other prisoners not to find out and cause a generalized revolt.

Vlastos and the comrades released the remainder of the visitors and the people guards.

After the visitors left the prison, ending their long day, they had to deal with all sorts of cops harassing them and searching them, while interrogating them with the last demand, “do they want to press charges against the prisoners”… !  Of course they received the appropriate answer.

Comrade  Christos Tsakalos said: “Today we tried to do something. To gain our freedom and the continuation of urban warfare. We lost a battle, but we have not lost the war and continue to fight to win. We are an organization that fights for the ideals of a free life without any authority. “

ALL THE COMRADES MEMBERS   OF THE C.C.F THEY ARE OK!

ALL OUR STRENGTH TO THE COMRADES

THE REAL TERRORIST IS THE STATE

ESCAPE AND FREEDOM TO ALL

EVENT: for the upcoming second trial of the Halandri case TUESDAY 13/12. 18.00 POLYTECHNIC UNIVERSITY, ATHENS *open call with the imprisoned fighters Members of the C.C.F.