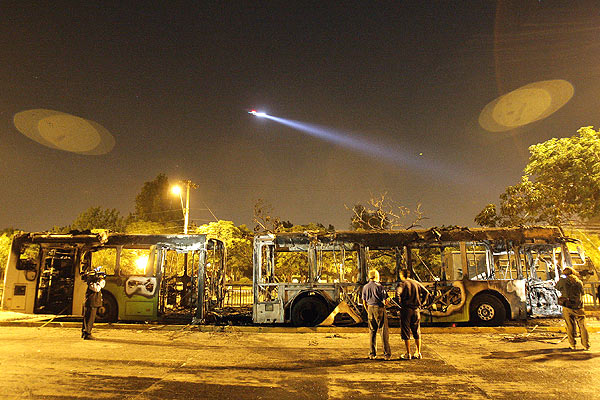 We decided to attack their dirty machine with the fire that is our friend, we covered our faces and we went with eyes fixed on the objective, we intercepted a 506 microbus of the nefarious $hilean transport system and, after having the passengers (whose inability to take position in the war led them to criticize those who struggle) get off we doused the tires and interior seats to later launch a phoenix so that the fire arising in the streets which at that hour were filled with a spirit of false solidarity; our eyes laughed to see how that street corner burned; minutes after the attack we disappeared with the wind, they did not know who struck them; with our action we want to remind the powerful that we are here, that we have not wavered, that although they imprison us we are not afraid, we want

THE FIRE TO VENGEFULLY REMEMBER THE PRISONERS MURDERED BY THE DAMNED PRISON SYSTEM IN SAN MIGUEL PRISON, WE WANT THE SMOKE OF THE BARRICADES TO OPEN UP TO THE COMRADES WHO EVADE POWER, WHO FLY HIGH, WE ALSO REMIND THE PRISONERS ACROSS THE WORLD YOU ARE NOT ALONE

We call for the multiplication of actions, for the expansion of the barricades over the whole world, for there to be no peace for the powerful; let us transform ourselves into a volcano and make the cities burn, let us become earthquakes and destroy every center of consumption.

WE DO NOT WANT THEM TO DOMESTICATE US

See: report of the events claimed in this communique (in Spanish)