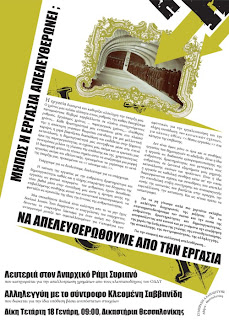 Work penetrates and determines our whole existence. Time flows merciless at her rhythm as we commute through identical depressive surroundings at an ever increasing pace. Working time…productive time…free time…Every single one of our activities falls within her context: acquiring knowledge is considered an investment for a future career, joy is transformed into entertainment and delves into an orgy of consumption, our creativity is crushed within the narrow limits of productivity, our relationships -even our erotic encounters- speak the language of performance and usability… Our perversion has reached such a point that we search for any form of work, even voluntary, in order to fill our existential void, in order to “do something”.
We exist to work, we work to exist.
The identification of work with human activity and creativity and the complete domination of the doctrine of work as the natural destiny of humans have penetrated our consciousness to such a depth that the refusal of this enforced condition, of this social coercion, seems as sacrilege towards the very concept of humanity.
So any job is better than not having a job. This is the message spread by the evangelists of the existent, sounding the kick-off for the ever more frantic competition between the exploited for some scraps from the bosses’ table; for the instrumentalization and complete leveling of social relationships in exchange for some miserable job in the galleys of survival.
It is not, however, only the terms and conditions of work which create a dead-end. It is work as a totality, as a process of commercialization of human activity that reduces humans into living components of a machine consuming images and products. It is work as a universal condition under which relationships and consciousness are formed, as the backbone maintaining and reproducing this society based on hierarchy, exploitation and oppression. And as such, work must be destroyed.
So we don’t merely become more content slaves or better managers of misery. So that we can re-signify the aim and essence of human activity and creativity by acting together and driven by the search for the joy of live through knowledge, awareness, discovery, camaraderie, solidarity. For individual and collective liberation…
LET’S LIBERATE OURSELVES FROM WORK
FREEDOM FOR THE ANARCHIST RAMI SIRIANOS
accused of expropriating some of the stolen wealth from the ODDY
SOLIDARITY WITH COMRADE KLEOMENIS SAVANIDIS
prosecuted for the same case without any evidence
Court date: 18th of January 2012, Thessaloniki
Athens-Thessaloikni Solidarity Collaboration