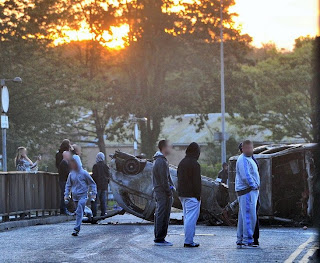 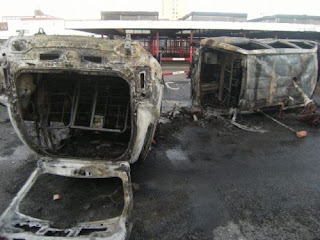 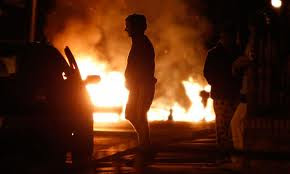 excerpts from salfordstar
22/01/2012 – Last Friday, Salford man Zac Challinor got five and a half years in jail for torching the BBC Radio Manchester car at Salford Precinct. It was the lengthiest sentence doled out for any rioter. But, so far, the media hasn’t bothered to report it.
At midnight on 9th August, Challinor posted on Facebook that he was going to see what was happening in town. …
Within hours, Salford streets erupted and Challinor was on the front line.
At 5pm, Challinor threw a coin at lines of police in riot gear battling with youths in Brydon Close. Hundreds of youths overturned a BBC Radio Manchester car in Heywood Way. Challinor excitedly suggested ‘come on lets set it on fire’ and lit the match. As smoke rose over Salford, the mob made their way to LIDL, smashing through the shutters. Challinor was captured on CCTV with armfuls of aerosols. Finally, Challinor aimed a kick at William Hills in the precinct but for some reason stopped before the shutters were damaged around 9pm.  Hundreds of thousands of pounds worth of  damage was attributed all or in part to Challinor’s actions.
Challinor received the lengthiest sentence of any rioter.
The majority of those brought before the courts for offences related to civil unrest during the summer are young men like Zac Challinor and Stephen Carter. Like Carter, another of Salford’s sons serving time for riot related crime, Challinor was homeless, jobless and estranged from his family at the time of the riot.
Media blackout
In recent months, Salford has been awash with journalists. No-one reported on Challinor’s landmark sentence which will, like Carter’s, form a bench mark for prosecutions taking place later this year. Within minutes of the BBC car being set on fire, images were being broadcast on Youtube. With their staff as the story, the BBC has shown little taste for broadcasting what was behind the destruction.
MediaCityUK has become the forbidden city for  thousands of Salfordians denied employment, to the elderly who will be confined to their homes by the closure of day centres, to women forced to give birth on the kitchen floor because of the closure of Salford Royal maternity unit, to the people whose homes are being repossessed, to the families forced out by regeneration to make way for new housing that they cannot access, or the schools reducing  25% of the teaching staff.…Repossession notices, redundancy notices, closure notices – no damn notice is paid to the conditions that have blighted Salford for years. The only notice given to those beyond the Media City walls warn of powers to disperse groups under the Anti Social Behaviour Act 2003 who seek to disrupt the brave new world.
As the marketing of Media City struggles to maintain the illusion of a cohesive community – `Our City, Your City’ – the truth is that it’s their city now and disaffected youth, the elderly, the sick or impoverished have been cast aside.
…
The torching of the BBC car will never be seen as a symbol of working class struggle by the organisations at the interface of accelerated social change and the digital revolution.  But perhaps it should, as youths gather in shadows of the precinct with nothing to do, nowhere to go…