Here are, apparently, only a few of the facts that immigrants suffer every day, reported by their supporters:

– At the Attiki metro station, at around 6 every evening, cops, either in uniform or without, assisted also by pass controllers, ambush the immigrants who come out of the subway. They do not ask for their documents; they just immobilize them, search them, beat them up and steal what they find in their pockets. The same has happened at the Victoria metro station.

– At Larissis (Larissa) central railway station, cops along with fascists beat any immigrant that they manage to isolate.

– The torture continues more methodical at the Aliens Police Directorate in Petrou Ralli Street, where immigrants — even those who have papers — are transferred after being caught in the neighbourhoods of Victoria Square and Attiki Square and in the wider area around Acharnon Street, after first being held in the dungeons of the notorious police department of Aghios Panteleimonas. At Petrou Ralli, the cops lock them up all together in one detention room and spray chemicals directly on the detainees, causing them suffocation, and at the same time they capture their torture with cell phone cameras. In addition, they keep people there for a whole day without giving them food, or the right to go to the bathroom, cursing them and threatening to kill them.

These are scattered testimonies — from the few who are disclosed — on the fascism which day by day is reinforced by cops, fascists, ministers, the mainstream media and mayors, as well as a large deadened part of society who watch this violence with indifference.

What are we waiting for?

On Thursday, March 29, 2012, at approximately 13.30 GMT+2, a group of about 20 neo-Nazis — according to information received so far, aligned to ‘Chrissi Avgi/Golden Dawn’ and/or to the Cypriot fascist group ‘DRASIS-KES’ — entered the faculty of Mathematics and Physics of the University of Athens main campus in the suburb of Zografou. (Some commentators on Indymedia Athens claim that the scum affiliate themselves solely with ‘DRASIS-KES’.)

The thugs injured at least three students. According to eyewitnesses, they had sticks, helmets and possibly axes. Students managed to group up quickly and to hold an antifascist demonstration of a few hundred, while the perpetrators of the attack had already disappeared from the scene.

In a remarkable twist of reality (even by their usual, low standards) many mainstream media outlets claim this neo-Nazi assault to be an attack by ‘hooded-up youths’ (kukulofori), with an indirect or even direct reference to anarchists.

The offices of ‘DRASI-KES’ were left with busted windows after the spontaneous demonstration of nearly 500 students, among them leftists, antifascists and anarchists, through the campuses and the streets of Zografou and Ilissia, who protested the coordinated fascist attack at the university premises. The injured students are reportedly better now.

The hell of Petrou Ralli, prison wing for migrants in athens….

Against Fascist Pogroms in Athens 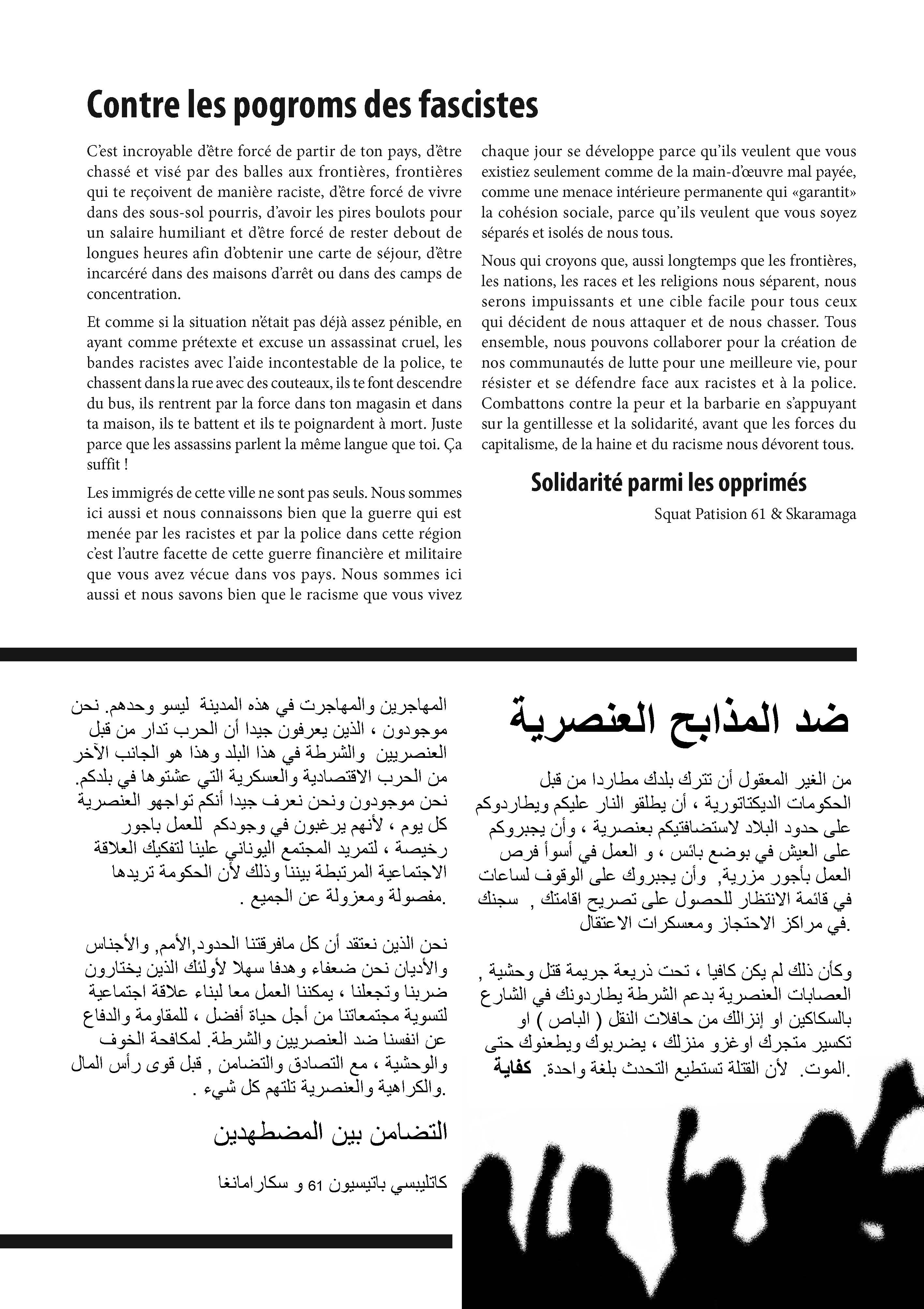