Posted on May 12, 2012 by culmine translation act for freedom now/B.pd 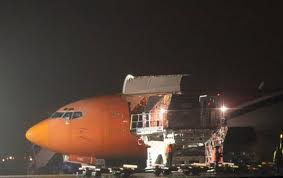 source: , 12 maggio 2012
The power of attorney of Bologna has concluded the investigation on a parcel bomb that was sent to Silvio Berlusconi from Greece. The event forced a Tnt plane to an emergency landing  at the Marconi airport on November 2 2010. Among the seven people who received notice of the conclusion of the investigation, there are the four anarchists whose names are mentioned in the claim of the attack on Roberto Adinolfi.
The seven Greek anarchists – all of them imprisoned in their country –  are accused in Bologna, on the basis of the investigation of the Greek authority, of committing an attack with terrorist aims and of possession of explosive material with subversive aims.
The investigated people are Georgios Nikolopoulos, aged 26 anni; Christos Tsakalos, aged 33; Panagiotis Argyrou, aged 24; Gerasimos Tsakalos, aged 26; Giorgio Karaghiannidi, aged 32; Charilaou Chatzimichelaki, aged 24; Alexandrou Mitrousiaaged 23. The names of the first four people appear in the claim sent to the Corriere della Sera yesterday.
The Greek authorities believe the seven are members of the Conspiracy of the Cells of Fire, which belong to the galaxy of the Informal Anarchist Federation. The Ccf/Fai claimed the campaign of parcel bombs in Greece. Parcel bombs were sent to some European leaders, including Sarkozy, Merkel and Berlusconi at the end of 2010.
The Bologna investigation, carried out by the Digos and coordinated by public prosecutor Enrico Cieri, relied a lot on the results of the Greek investigation, which led to the imprisonment of the seven. Some assessments were carried out by rogatory, while others were made directly in Athens by the Bologna investigators, who brought the results of their examination on the parcel bomb found on the plane to their Greek colleagues.
The seven Greek anarchists are accused of having fabricated and sent the parcel bomb addressed to Berlusconi. The parcel was loaded on a plane of the Tnt flying from Athens to Liege. The alarm was raised because of the name of the Italian prime minister as addressee. The plane, which was flying over Italy, was made to land in Bologna at 10pm.

The explosive device was placed inside a law text written in Greek, which had been cut so that some gunpowder and a primer could be put inside it. The activation system was made by an electric circuit, a halogen lamp fed by eight batteries of 1.5 volt, a peg working as fire switch and gunpowder with explosive material.