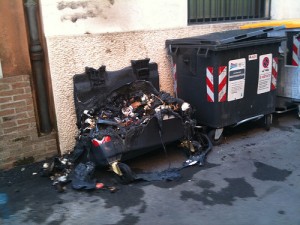 source:, 21.05.12
An explosive device (paper bomb) blew up at around 3am on Monday 21/5  inside a skip near a polling station in Rapallo (Genoa). The device exploded right in the piazza of Rapallo. The rumble of the explosion was so loud that several people residents in the area went out to the street. All police forces and the fire brigade went to the scene in order to extinguish another three skips set ablaze. According to the investigators the action is criminally motivated and is linked to the arson of two municipal police cars that took place in a nearby area. Carabinieri confirmed that the two cars of the local police were put on fire outside the police headquarters, whereas two of the four skips that went up in flames were placed near the school where the polling station had been set. There were no wounded.

Not even a step back

Solidarity with all squats